Interesting Zb on eBay. Don't see the use of that metal thing though.You think they put it on the wrong side of the strings? On the other side it would make sense... And that bridge!

Well, I've never seen anything like that except for plectrum players on a tenor banjo, and as you say below the first string. Odd. Maybe it helps five-string tremolo...maybe not. The bridge is just silly.

That said, that looks like a really fine zb for the price. You can replace the bridge, and take off the arm rest, of course.

The bridge looks like a wooden approximation of one Pete Seeger used for many years. Pete's was made from an electronic circuit card. Very famous, in those circles. 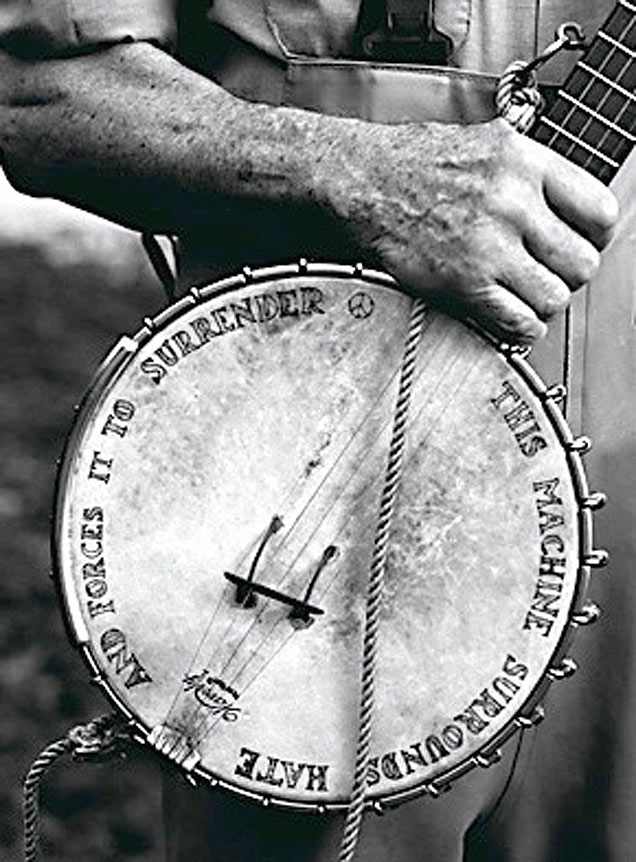 I would guess that the bridge extensions are designed to mute the sound. Instead of shoving stuff between the perch pole and vellum  (not convenient on a zither banjo) the muting is done from above. As for the metal thing.... maybe the player who installed it was left handed and held the banjo the other way round with the fifth string toward the ground.

Pete had a lot of trouble keeping his bridge upright and in place. The arms are there to stabilize it. He could knock down even the Grover "no-tip" bridges. Even with this goofy bridge, he had trouble keeping it in place. You can see he glued the whole thing down to his banjo head.

I never understood his difficulties. I've never had a bridge move or fall over when I'm playing (and I do play clawhammer style also). Of course, I'm not playing in front of a gazillion people at a festival either. I guess he just had to hit it really hard!

I would guess that the bridge extensions are designed to mute the sound. Instead of shoving stuff between the perch pole and vellum  (not convenient on a zither banjo) the muting is done from above. As for the metal thing.... maybe the player who installed it was left handed and held the banjo the other way round with the fifth string toward the ground.

As a side issue, what make was Seeger's banjo?...Steve.

Vega "White Laydie". His original was stolen in '49 but by the 50s he'd gotten popular enough that Vega started making long necks with his permission (he declined any royalties).

As a side issue, what make was Seeger's banjo?...Steve.

Marc, you might check as I think it was a Tubaphony banjo rim with a self made neck for the banjo in that photo.

I can't speak for the photo since I don't know when it was taken. I did look up Pete's banjos.

Pete experimented with several banjos originally. From what I read, the banjo that was stolen in '49 was a White Laydie which had its neck stretched by John D'angelico in NYC. Vega built his replacement in the 50s and I have no idea what it is. I've seen photographs of him with other long-necks (ODE? OME?) also.

There are some guys on BHO who are as obsessed over Pete's banjo as we are FVE.  Over the years they have documented the banjo down to the last detail.

Yes, longneck banjo #1 was a WL with extended neck.  Stolen.

I think the one he is most photographed with was a Tubaphone rim and a neck that he made himself from lignum vitae.  With this one D'angelico refretted the neck to a different scale after Seeger built it.  That is "the" Seeger banjo.

Bill Nelson's Vega built him two (I am going from memory of a subject that I did not pay that much attention too) and he gave one away and eventually auctioned the other.  Both were Tubaphone rings.

But don't take my word for it-- search the BHO for "Pete Seeger lignum vitae banjo" for more info than you ever wanted.