What is Classic Banjo?

In this 30 minute video site member Peter LaBau talks briefly about the "Classic Style" of  banjo playing and, along with

2. What is Classic Banjo?

3. How can I learn Classic Banjo?

4. Why should I learn Classic Banjo?

5. Is there a difference between Classic and classical banjo?

6. Is Classic Banjo less "authentic" than other styles of banjo playing?

What is a banjo? Technically, the answer is quite simple – the banjo is a plucked lute chordophone, which produces sounds by the vibrations of strings which are transmitted to a stretched membrane via a bridge. However, the banjo, as a cultural construct, is far more difficult to define. For the vast majority of the population, the banjo is a relatively unknown instrument; it has a round body, a neck like a guitar, and is either played by inbred, toothless hillbillies, pizza parlour banjoists in loud “riverboat” costumes, or George Formby imitators.

The banjo, it is said, is an “insufferable” instrument; it is considered “loud”, “annoying”, and “undesirable”. The banjo is an object of derision, in popular culture.

This perception of the banjo, however, has undergone many changes throughout the years – some for the better, some for the worst – and, whereas the instrument, in its basic configuration, has hardly changed in the past 100 years, its repertoire and cultural connotations have been turned upside down. Believe it or not, just over 100 years ago the banjo was a mostly urban phenomenon, which started its life in working-class concert halls and minstrel shows, briefly flirted with the wealthy establishment and the world of the parlour, and led the way in the Ragtime phenomenon.

Throughout those years, the public’s love-hate relationship with the banjo was more obvious than ever – the instrument had achieved tremendous popularity; hundreds of thousands of banjos were manufactured and sold, and the instrument was at the vanguard of the nascent recording industry, yet the humble banjo did not manage to shake off the negative social stigma which was attached to it, and fell into obscurity after the banjo craze had passed. 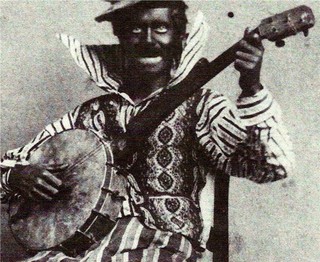 There have been many renewals of interest in the banjo, which has since conquered new niches such as Bluegrass, Country and Old Time music, Irish trad music or traditional Jazz; but a loyal core of followers of the original fingerstyle method of banjo playing, known as Classic Banjo, remains, and the style is currently experiencing a rebirth thanks to the internet.

This website is dedicated to spreading the word about this style of banjo playing, and to promote knowledge and critical thinking about the instrument.

2. What is Classic Banjo?

There is a certain amount of confusion on what Classic Banjo is, which mostly stems from its name. Indeed, the name Classic Banjo, which was chosen by the American Banjo Fraternity, is often confused with “classical banjo”, which leads us to think that it is “classical music played on a banjo” – a relatively small, niche style in which modern, steel-strung banjos are often used.

The terms “Classic” and “classical” tend to create an association with classical music, which, in the mind of your average banjoist, carries often negative connotations such as “difficult”, “snooty”, “elitist”, &c.

Indeed, the average banjoist nowadays only has a vague knowledge of what banjo playing, in the years Before Scruggs, was like; the general stereotype goes something like this:

Back in the late 1800s, the banjo – an essentially rural instrument – was ripped from the hands of poor, illiterate hillbillies by evil, greedy snobs such as Samuel Swaim Stewart, who proceeded to try and make the banjo a high-class, classical instrument by re-spelling its name to “banjeau” and other such dastardly shenanigans. Of course, this unhappy marriage of the banjo and classical music did not last, and by the 1920’s the banjo was once again free to roam in the Appalachians, where honest, illiterate folks could get back to transmitting ancient, oral banjo traditions. 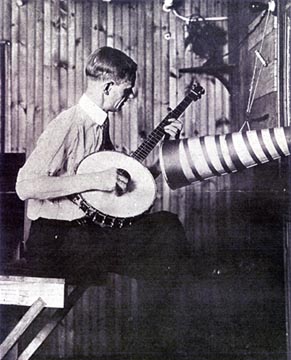 This view, which is widespread in the banjo-playing world, tends to dismiss Classic Banjo as a historical error – as an unsuccessful attempt to steer the banjo from its “true” nature.

However, to dismiss a period in which the banjo was infinitely more popular than nowadays, in which thousands of original pieces for the banjo were published, and in which there was an amateur banjo club in every city, is to miss out on a huge part of banjo music and culture which lies, dormant and almost forgotten, but ripe for the picking.

So, what is Classic Banjo? Classic banjo is:

Classic Banjo is not:

Nowadays, many excellent banjoists are “reinventing the wheel” and, unknowingly, returning to what Classic Banjo really stands for – being able to get the most out of the banjo, as an instrument. Now, more than ever, Classic Banjo has its place in the banjo world and in the 21st century.

3. How can I learn Classic Banjo?

Whereas it is very difficult to find a teacher near you, nowadays, there are many options available to those who wish to learn how to play the banjo.

4. Why should I learn Classic Banjo?

Learning to play Classic Banjo has ample benefits which await those with the patience to achieve them. Learning Classic Banjo will:

5. Is there a difference between Classic and classical banjo?
There is a certain amount of confusion on this subject due to the name "Classic", as has been pointed out earlier. The original Classic-style players did not call themselves "Classic" banjoists, "classical" banjoists or any other such labels; they were, simply, banjoists. In 1948, when the popularity of Classic Banjo had waned considerably, a group of American banjoists got together to resume playing this style of music, and in 1955 they formed the American Banjo Fraternity, a society dedicated to keeping this style of banjo playing alive.
By that time, the banjo, which had gone through the plectrum and tenor craze, was heading towards its more familiar, modern "folk" incarnation in what is commonly known as the Great Folk Scare, and the ABF adopted the "Classic" label to distinguish their style of banjo playing from the new "folk" styles.
There is no such genre as "classical banjo", as the banjo has not been accepted as a classical instrument other than by a few composers and performers, although there are a few musicians who play classical music on the banjo, such as John Bullard or Béla Fleck.
6. Is Classic Banjo less "authentic" than other styles of banjo playing?
According to common stereotypes about the banjo nowadays, the banjo is an "essentially rural" instrument, with a rural repertoire which is often played by ear. Reading banjo music from notation is seen as "un-banjoish" -- an elitist, snobbish and outdated attitude adopted by people who wanted to "elevate" the instrument. However, it is important to keep in mind that these stereotypes are cultural constructs and that the way we see the banjo nowadays is not the way people have always seen it. When the "old-timers" such as Joe Morley or Emile Grimshaw wrote banjo music in notation and played fingerstyle, they did so because it allowed them to compose and play more ambitious and complex music for the banjo, and it is this style of playing which made the banjo such a popular instrument with all social classes.
Whereas it is easy to disparage Classic Banjo as belonging to "educated city folk", this style of music was accessible to all -- after all, the greatest Classic Banjo composer, Joe Morley, was born poor and died poor.
Classic Banjo is authentic in so far as it is a long, verifiable living tradition; whereas many banjo "traditions" are based upon dubious oral accounts, speculation and nostalgia, Classic Banjo has a wealth of recordings, sheet music, and living players and teachers which confirm its authenticity as a style of banjo playing.
7. What is "banjo music"? Banjo music is a very important genre in Classic Banjo; whereas modern banjo styles often play music which was not specifically composed for the banjo -- such as Old Time or Bluegrass standards, with a banjo part in them -- Classic Banjo is unique in that a good amount of the music performed cannot be found outside the banjo world. It is, basically, music which has been composed specifically for the banjo, and it makes up a large part of the Classic Banjo repertoire.
Even a good deal of arrangements of popular music have a strong "banjo" flavour, which is what makes Classic Banjo music so appealing.

Over the years many errors have become perpetuated as to the origin of the 5 string banjo as we know it today, and how it evolved as an instrument.

In this excellent article site member, Tony Thomas, corrects some of the misconceptions:

Joel Walker Sweeney never claimed that he invented the banjo.   During his lifetime (1810-1860), the general knowledge of the banjo’s African American origins were so clear such a claim would not have found much hearing.   Yet, Sweeney was certainly the most important early popularizer of the five string banjo as we now know it.

Sweeney never said he heard African Americans in nearby plantations playing other instruments that resembled banjos.  Sweeney said he learned the banjo from African American banjoists.  His contemporaries reported Black banjoists were common in the area of Virginia where Sweeney grew up.

Sweeney was certainly the first major European American banjo entertainer.  Following his entry into circuses and stage shows in the mid-1830s, Sweeney popularized the banjo in North America, Britain, and Ireland.   Sweeney began playing a four string banjo similar to the early gourd banjos first reported in the 17th century. He eventually played and popularized an early model of the five-string banjo with an additional lower string, nowadays usually tuned to C or D.  By 1840 he had switched from gourd banjos to frame headed banjos.

In the late 19th century a fiction was created that Sweeney invented the banjo.  At times, this myth has revolved around the claim Sweeney added the short string or that he added the lower string, both of which had been reported on banjos previously.

These claims seem to seek to detach the banjo from its actual creators, Black people in the Caribbean, and from the African Americans who brought the banjo to North America.    Modern research confirms what Sweeney and his generation of banjo entertainers said.   Their stroke and two-finger minstrel styles were based on Black American banjo approaches.

Unfortunately, the idea of Sweeney’s “invention” of the banjo reinforces the false idea that the banjo is solely an “American” instrument.  Indigenous banjo traditions exist in the Caribbean where the banjo was first reported.  Moreover, tours by Sweeney and others in the 1840s swiftly made banjo playing popular in Britain and Ireland.  By 1850 the banjo had reached Australia. In the 19th Century the banjo became a world instrument.

Yet, this should not diminish Sweeney’s greatness.   Reports of his performances in the United States and the United Kingdom ring with the excitement he created.  His success encouraged many to pick up the banjo.  He popularized advances in banjo construction that made banjos sturdier, extended the banjo’s musical range, and made banjos easier to manufacture.   Sweeney always pointed to the Black origin of the banjo music he made.  Sweeney and the other banjo entertainers of his generation were crucial to the spread of the instrument in the United States and throughout the world.

The best available source on Sweeney is Bob Carlin’s The Birth of the Banjo: Joel Walker Sweeney and Early Minstrelsy a book that belongs in every home!

The most up to date information on the roots of the banjo are available at https://www.facebook.com/pages/Banjo-Roots-Banjo-Beginnings/146459448740018, maintained by the world’s leading scholar of banjo origins Shlomo Pestcoe.