Just finished another research project that made the last week or so of lock-down go by faster. Thought I'd share with my fellow CB enthusiasts :

Stephen B. Clements is one of the best classic banjoists and recording pioneers you never heard of. His legacy of 7 early Berliner discs has remained obscure, but his fine playing deserves a listen and he should be overlooked no longer.

Steven was born in Washington D.C. in 1865, son of Edmund Clements, a carpenter (b. 1819) and spouse Hester. He had two older siblings, Albert F., 8 years his senior, who became a carpenter and Martha Rosalie, his elder by two years. The youngest was Mary E., 5 years his junior.

By 1877 the family had moved to 1016 8th St n.w., a three storey brick row house near Mt Vernon Park , and a few blocks from banjoist Joe Cullen`s family home. Like the Cullens, the Clements took roomers in their home to supplement income. Stephen attended St John`s Collegiate Institute, where in 1881 he was awarded a premium for phonography, the science or practise of transcribing speech by means of symbols representing sounds, referred to today as shorthand. He graduated from St John`s in 1883.

Nothing about his banjo education has been uncovered, but his progress reading and playing from notation may have been accelerated by the same natural skill sets that allowed him to excel in phonography. By 1887 he was working as a stenographer and likely performing when possible. His mother passed away in 1888.

By 1891 his public appearances were being reported in the newspapers. In August of that year he performed "The Old Folks at Home" with variations, at the Marshall Hall Midsummer Festival. His solo was given in association with the Washington Mandolin Banjo and Guitar Club, organized in January of that year with ten members, all excellent performers, including Clements and pianist Charles McEnaney. Banjoist Joe Cullen was an associate member. The club experienced a quick rise in popularity and by year's end had appeared at the Elk's banquet, Willard Hall, Shakespeare Club, Theatrical Mechanics Association, National Capital Press Club, Washington Light Infantry, plus many benefits by churches and charitable organizations, most of which were not mentioned in the press.

Despite his being well-received as a performer, for the next few years Clements' banjo performances were a supplement to his day job as a stenographer. His shorthand skills were brought into play in his musical ventures. In January 1894 he was elected secretary of the Imperial Banjo Mandolin and Guitar Club. Long time banjoist, teacher and copy typesetter W G Collins was elected director.

By 1895 Clements was actively pursuing a musical career. He was listed in the Washington Directory as a music teacher. Billed in newspaper ads as soloist and teacher, he offered lessons taught by note or simplified method (tablature). His performances were reported in the newspapers more frequently, with comments such as "entertaining numbers "plucked" from a banjo", "greatly appreciated", and "Steve Clements' work on the banjo is too well known to the public to need any commendation here".

He appeared at various club entertainments and benefits as a soloist, as a member of the Imperial BMG Club and as a member of The Burnt Cork Club. This new organization usually opened with a couple of sketches in black face followed by professional caliber specialty acts including acrobats, spiritualists, contortionists, musical quartet, dancer and banjoist.

Some time before May, 1895 he recorded " Belles of Virginia " and "Darkies Patrol" for Berliner, presumably in their Washington studio. " Belles of Virginia ", which can be heard below , reveals his able musicianship. At the Ad Writers Association sociable in November, he appeared on the same bill as talented young pianist, Fred Gaisberg, who was for a time Berliner's house pianist. Closing out the year at the Golden Rule Lodge (International Order of Masons) he performed "Suwannee River" and "Home Sweet Home" with variations, for which the press reported "the banjo music of Prof. Clements elicited a storm of applause, he being several times encored".

In February 1896 Steve recorded "Queen of the Forest", "Jolly Darkies" and "Banjo Medley" for Berliner. In October of the same year he recorded Kerry Mills' "Rastus on Parade" and A.A. Babb's "On the Mill Dam Galop", a piece familiar to all ABF rally attendees. Four of those pieces can be heard below. All have been edited to boost their faintly audible signal and reduce their staggering noise levels. Three have been adjusted so they are now very near score pitch and corresponding tempo. Much of "Banjo Medley" should sound familiar to classic banjo enthusiasts. The bulk of the recording is Steve's arrangement of Thomas Hindley's "Patrol Comique".

For the next few years, Steve continued to perform as a soloist as well as member of the Burnt Cork Club, at various social club and association gatherings. However, it seems newspaper accounts of Steve's performances generally decreased in number year over year, due either to an easing of public news interest or simply there being fewer performance opportunities. Either way the financial implications to a working musician are obvious enough. In April 1899 Steve performed banjo melodies in the Frawley Company production of "Alabama" at the Columbia Theater. His Burnt Cork Club appearance the following August before a crowd of 2,000 in the amphitheatre at Glen Echo appears to have been his last reported engagement as a career banjoist. 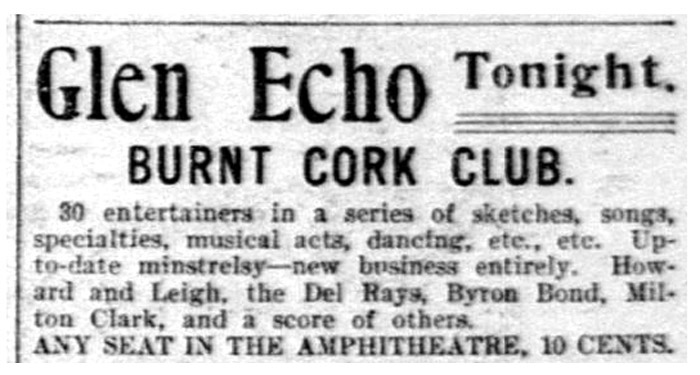 In January, 1896, around the peak of his musical career, Steve was elected recording secretary, District Assembly 66, Knights of Labor, a labor federation founded in the US in 1869. Among the several local organizations represented in the Assembly was Musician's Labor Assembly 4308, Knight's of Labor, to which Steve likely belonged. Two years later, Steve was elected a secretary of the local Federation of Labor. He probably had a strong natural urge to serve, but it is also possible his musical career was not working out financially and Steve was exploring supplements or alternatives.

Steve married Nannie G. Reynolds in August of 1899, around the time of his apparent career-closing Glen Echo performance mentioned above. He departed Washington for the Philadelphia Navy yard in 1900 and began a career in government service. His father died that November.

In 1901, Steve's first child, Stephen B Jr was born in his wife's home town of Shepherdstown, WVA, presumably at her parents' home. Steve returned to Washington that year or thereabouts, taking work as a post office employee and returning to live in the family home at 1016 8th n.w. where his brother Albert F. still resided. Steve and two of his siblings filed a partition suit against sister Martha Rosa in order to settle their father's estate with a sale of the premises.

Steve's daughter Ester Leah was born in June of 1902. Eleven months later, in May 1903, Steve and his young children suffered the tragic loss of wife and mother Nannie. In October of that year, Steve transferred to the Civil Service Commission where he worked as a clerk and stenographer.

The partition suit progressed, with his older sister's mental condition assessed by the court in 1904. In 1906 Steve's older brother, Albert F., died suddenly. Around that time Mary E. returned to live in the family home. The lawsuit continued until February, 1907, when Steve and younger sister Mary E. purchased the home at public auction. In March, the District Supreme Court ruled on the lunacy of sister Martha Rosa and appointed Steve committee. In December, sister Mary E. transferred her interest in the family home to Steve.

During this time, Steve was still performing occasionally. Newspapers report him playing banjo solos at the Young Men's Club of a local church in 1905 and banjo solos at the Carroll Institute in 1906. He may have performed at additional events not covered by the press.

Steve married fellow government clerk Mary Ann McGee in October, 1912. She did not become a full time home maker, instead continuing with her government job. The couple remained at 1016 8th n.w. along with several roomers. Steve's retirement from the Civil Service Commission came in July, 1930. On the occasion, officials and employees presented him with a fishing outfit. In retirement he was an active outdoorsman. Perhaps he was still an active banjoist as well.

Stephen B. Clements died July 8, 1942 and rests in Mt Olivet Cemetery. The family home was among the several blocks of buildings demolished to create the superblock needed for the enormous Walter E. Washington Convention Center, completed in 2003.

Thanks to The Reallyniceman for the player windows.

Wow, these recordings are fantastic time machine. What a good player he was. So articulate!

Yes super coo!  Thanks for this Shawn!!

Do you know what the bit is at the end of "Jolly Darkies" after the trio, I don't recognize it.

Glad you both enjoy his playing. Indeed he was very good.

I'm hoping a fellow Ning member may yet identify the bit added to "Jolly Darkies". I don't recognize it either.

I have had "Rastus" and "Jolly" repeating all day.  This guy has personality in his playing!

I did not even like "Rastus on Parade"-- after hearing this, I think I do.

Yah, I've gotten a couple of "can you play that quieter?!?" from Miz Diane today. Of course, she considers the banjo 'annoying' but ancient recordings of the banjo must be off her "annoying sounds" chart. ;-)

I went looking for the 'original' "Jolly Darkies" (expecting derivation from a piano tune) and found two other piano tunes of the same name...one has a similar structure but really both are different tunes (at least that's what my ears say).

"Banjo Medley" is a serious display of picking talent. Wow.

Thank you Shawn! This is great stuff!!

Anyone have the dots to "Belles of Virginia"? It is hard for me to follow on the recording but the bits I hear sound interesting!

In "Banjo Medley", I like the bits he plays on either end of "Patrol Comique".

Without a score for reference, "Belles of VA" has received no pitch adjustment. As is, one strain is close to key of D and the following strain is around G. The tempo seems about right, so this may be near score pitch.

DAHR suggests "Belles of VA" or "VA Belles" may have been composed by GL Lansing. I like the piece and would also like to confirm the score pitch, so have placed a request to see if a copy is in the ABF library.

I haven't been able to track down a composer of the CB "Jolly Darkies" either. The Brooks and Denton score published in the early 1890's credits them as arrangers as I recall, with no composer credit.

Thanks Shawn for your research into this hitherto unknown, at least to me, banjoist. Interesting how these old banjo players suddenly get rediscovered. I took a look though my pile of mouldering paper but couldn't find 'Jolly Darkies' I've got 'Jolly Mariners'  and 'Jolly Girls' and 'Merry Coons' and 'Comical Coons' (I'm not sure if I should be mentioning these, my apologies to anyone who is offended) but no 'Jolly Darkies' . I listened to the 'Patrol Comique' too, (I also searched for this in the pile, but it has gone AWOL) very fine playing and lovely banjo tone, a revelation.

Look here or in the site MUSIC LIBRARY:

I believe that I have a Clifford Essex arrangement somewhere too. Here it is in A notation with the simple method below...

LOL, I knew I had seen "Jolly Darkies" somewhere before! I went looking for it in my collection but I've never broken out each title from the B&D #1, so it isn't 'searchable'...

Here it is in A notation with the simple method below...

Here is Tommy Glynn's 'Queen of the Forest' Here is Tommy Glynn's 'Queen of the Forest'