Here's Jolly darkies number 3 as mentioned by Marc in his recent post. I managed to get hold of a piano score on which bars 30 to 51 are marked as banjo and appear to be emulating stroke style banjo. The whole score sounds as though it could have been written for banjo. It's a catchy tune and not too challenging to play. The score and midi are in the library...Steve. Permalink Reply by Trapdoor2 on May 9, 2021 at 3:22
Yes, that tune has some elements in common with Gottschalk's "The Banjo" in that it is emulating a stroke style of playing.

Still don't know who wrote the Brooks & Denton one.

There seems to have been a lot of 'Jolly' people about in those days, Hunter wrote a piece called 'Jolly Johnnies' Cammeyer had 'Jolly Girls' and 'Jolly Mariners' I think, and doubtless there will be more in the lists.

Hi Richard, There are lots of jolly people about nowadays and we all play banjo...Steve.

There seems to have been a lot of 'Jolly' people about in those days, Hunter wrote a piece called 'Jolly Johnnies' Cammeyer had 'Jolly Girls' and 'Jolly Mariners' I think, and doubtless there will be more in the lists.

Got me thinking there Richard:

The Jolly Mariner    A. Cammeyer

They used to have a lot of Gays too, when gay meant something completely different.

In the Brooks and Denton c.1900 list of available compositions and arrangements, B&D are arrangers for "Tyro Mazurka" and "The Monitor March".

Ian: There's a gay piece in the list too : "Gai-nsborough March". Ruby Brooks gets his own attribution for "Belle of Columbia" with a simple "Ruby Brooks"...and several pieces are simply "by Brooks and Denton".

Both "Jolly Darkies" and "Tyro Mazurka" are mysteriously shown as arrangements on their pages...but in the listing above, Jolly Darkies is not an arrangement (perhaps simple errata?).

Frankly, I have no clue. Perhaps these pieces were originally written by B&D for other instruments or as songs and then subsequently arranged for banjo? Maybe Mr. Denton didn't want his name on pieces he wrote himself (there are none directly attributed to him). The copyrights are either "Brooks and Denton" or "E. J. Denton" (Harry's spouse?) or variations of the same.

Perhaps someone out there has the single sheet for "Tyro Mazurka" or the B&D "Jolly Darkies"? I would expect the single would have a more specific attribution.

Hi Marc; I was aware of the Book #1 attribution vs. the ad. We don't know which is correct.

It is also possible both are right. Perhaps  J.D. was indeed B&D's composition and following the book printing, copyright for the piece was registered by them. Alternately, it may not have been their composition, but given the success they were having with the piece, they may have purchased all rights from its composer (who remains unknown today), hence their composer credit in the ad.

Yah, I expect it will never be sorted out completely. I know I have some of the single B&D sheets but they're still buried at the moment. All of B&D pieces I have ever played came from the #1 book.

And here's the Southend Jolly Boys not looking too jolly 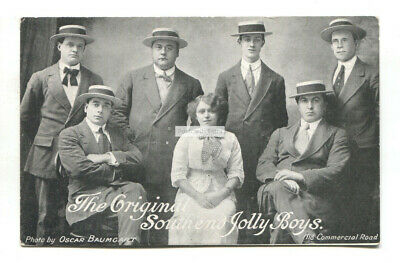 If I had to wear those collars, I'd be grim-faced too! I do have a straw boater...and look even more silly in it.

And here's the Southend Jolly Boys not looking too jolly

They look more like Southend Sour Seven, and the only one remotely jolly is not a boy.