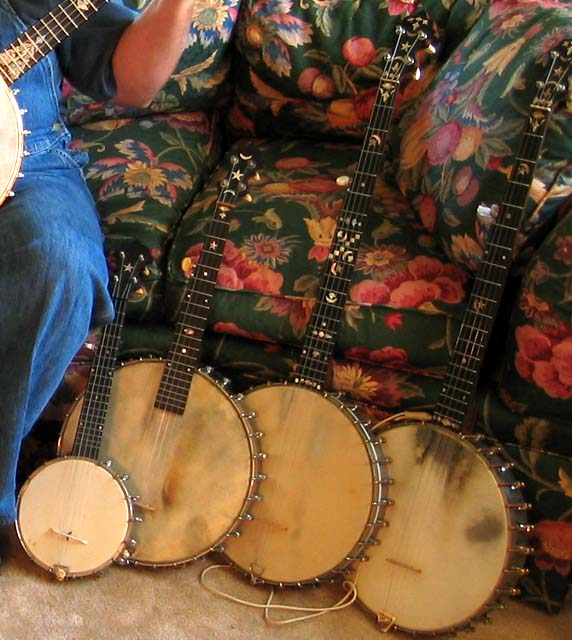 A Stroll Through Cairo (Egyptian Patrol) by J. J. Derwin

Trapdoor2 replied to Steve Harrison's discussion Mop Rag..1909..Helen S. Eaton
"Interesting...it does sound like a breakdown morphing into a rag. I have been accused of negligently mopping the floor. Next time I'm telling her it is a 'slow drag'..."
May 20

Trapdoor2 replied to Andrew 'blind boy' Butler's discussion LaBella 17
"Interesting question. If they are not "true enough" for use on a fretted instrument, did Clem have them ground true? I can't imagine he would do that. I have played several sets of CE guts and they seemed fine to me...though I'm…"
May 18

Trapdoor2 replied to Andrew 'blind boy' Butler's discussion LaBella 17
"Thanks Steve! I did get the 'varnished and unvarnished gut' listing...with gauges. Came in this morning. I think having the nylon gauges will complete the set! ===Marc"
May 18

Trapdoor2 replied to Andrew 'blind boy' Butler's discussion LaBella 17
"I have the same list, Steve. No gauges, inscrutable list of strings and prices from 2018. How did y'all get a list with gauges? I'm sending a query back..."
May 17

Trapdoor2 replied to Andrew 'blind boy' Butler's discussion LaBella 17
"I think "louder" is a function of less total mass in the vibrating system. They respond faster and seem to emphasize the sharper components as well. For me and my dependence on feel, Joel's "spiderweb" set forces me to play…"
May 16

Trapdoor2 replied to Andrew 'blind boy' Butler's discussion LaBella 17
"Over at Bow Brand, they must be wondering at all the emails from banjoists...I guess I'll send of one too... Now I'm wondering where Clem got his basses. I think they offered .028", 0.030" and 0.034" basses, silver wound…"
May 16

Trapdoor2 replied to Andrew 'blind boy' Butler's discussion LaBella 17
"Hi Rob, I remember you being surprised. Funny to think of one's name randomly on a product. Would be like finding my name and face on a can of beans in the market. =8^0 Just checked their (Bow Brand) website but trying to find the correct…"
May 15

I was raised by a pack of wolves, deep in the forests of Nawthern Alabama...

Ok, perhaps not. I'm told we were a "normal" family...if having an airplane in your garage (sometimes running the engine in the front yard) is normal. We did finish restoring it (a J-3C Piper Cub) and I soloed in it, etc.

I'm an engineering type, working on spare parts for Helicopter stuff, 8 to 5, weekdays. My wife, the inimitable Miz Diane also works with the Helicopter groups, albeit in the contracting and acquisitions end.

I have been playing the banjo since 1979, when I was taught "Cripple Creek" (Scruggs Style) by my now longtime friend, Patrick Camp. Although I started out on the Bluegrass end of things, one of the first tunes I learnt was an 1877 arrangement of "Spanish Fandango" published in "Banjo Newsletter" in the late 1970's. It was another 10 yrs before I attempted another Classic Banjo tune (or even knew what one was).

In 1992, I attended the "Tennessee Banjo Institute" in Lebanon, TN...meeting the likes of Clarke Buehling, Bill Morris, Chris Sands and Eli Kaufman...and listening to them play Classic Banjo. Their performances (and the cassettes I purchased from them) led me down the crooked path of the Classic banjo from then until now.

I have a lot of hobbies...but most have gone by the wayside for Banjo stuff. I have been collecting Banjo Sheet music since the 1980's and have scads of it stashed in boxes in my "music room", along with quite a few banjos...some vintage, some new, some 4-string, mostly 5-string, some are just banjos I got for a song.

I have been actively procuring the materials and equipment to produce my own banjos when I retire. I recently purchased the estate of a local luthier who specialized in producing somewhat illicit reproductions of a well-known banjo manufacturer. Lots of tools and bits and a huge pile of great wood. I've been woodworking since I was a kid and I've started several banjos...discovering my great talent is not finishing projects. ;-)

I have recently adopted the motto of John Steinbeck: Ad Astra Per Alas Porci. Seems to fit me!

Carl Anderton said…
Did I see that you have a tab for Heliotrope Bouquet? I'd LOVE to take a crack at that!

Ray Jones said…
Hi Marc.
We didn't record that track during the heat wave. As a matter of fact I found it in the attic! ( would you believe )
Regards Ray

Eric STEFANELLI said…
Hi Marc !
Good to know you're in this web bjo group!
My friends Marc D. and Ray J. told me about it.
I was not dead but very busy and moved to another country, i've time now for sharing goodle bjo music on the web again, i had some news from you here and there. I've many clips to put on this site, but a little time to do that, i will try to put some next weeks.

Ray Jones said…
Thanks for pointing that out Marc, I enjoyed listening to it. May I add my congrats to Gavin on his rendition. Beautifully done, and with picks if I'm not mistaken. This puts you up there with the best of 'em Gavin. Keep at it.

Adam said…
Hi Marc ... I really like your video of Sunflower Dance ... Can you point me in the direction for finding the sheet music for that tune? Tab would work too.

Thanks very much,
Best,
Adam

Adam said…
Thanks very much!

Ray Jones said…
I have a couple of Mandolin Solos. Ninon by Ellis. Manhattan Cakewalk by Ellis and The Stars and Stripes Forever by you know who. Ray

Ray Jones said…
Calm down mate, you'll have a siezure if you are not careful. You may be surprised to learn that there could have been as many as 5 or 6 blokes named Ernest Jones living in Wales at the time, and a few Ernest Smith's as well, I shouldn't wonder.

Ray Jones said…
Oh, I see!!! I didn't realise that you were talking about " THE " John Smith, that's a different thing altogether. Best Wishes to thee.