For your isolated enjoyment I present "The Prize Banjo Instructor" by Jean White, 1884.

This A notation book takes an interesting approach to teaching the banjo.  Included are four and a half pages of "Diagrams of the Finger-Board".  Ah, the old fingerboard chart strikes again, this time with in a different way.

You are to study each diagram and easily master your scales by following the notes left to right, bottom to top of each finger-board diagram (at least that is what I think you are supposed to do).

After you memorize all of those charts, there is a half page explanation on how to play and tune the banjo.  Now you can play banjo!  I guess you win a prize if you are successful?

All kidding aside, the book has lots of "early" style short pieces, some familiar to stroke style banjoists. There is also a cool "Yankee Doodle with variations" (featuring the one hand crank organ gag) included.  Plenty of waltzes and schottisches as to be expected.

As always, do what you want to with it.  The material is in public domain and you own it. 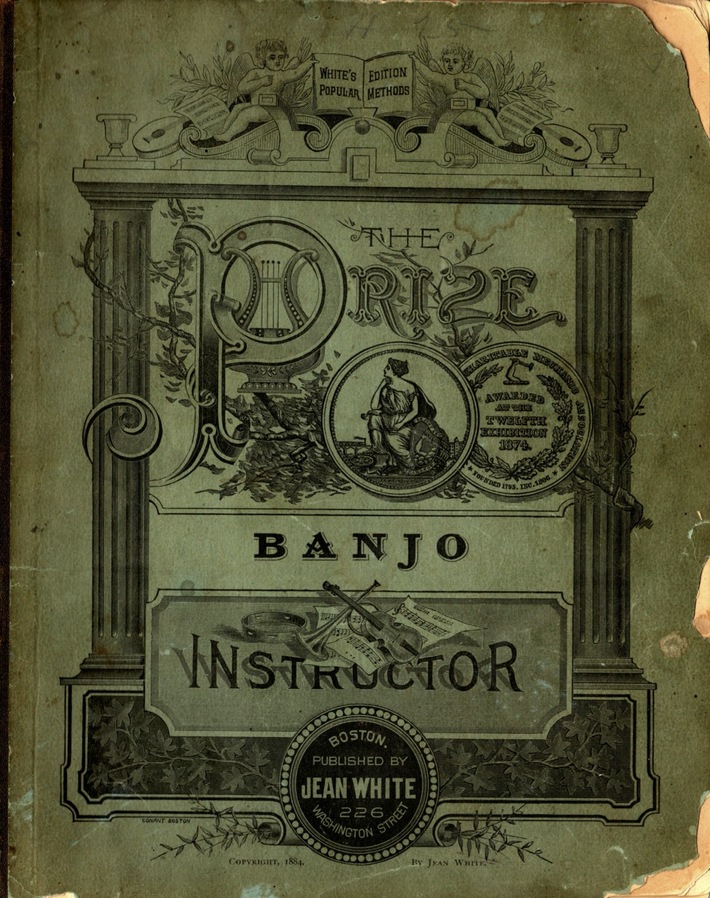 Looks like just another cobbled-together tutor. I've been amusing myself looking at this remembering when I knew nothing about banjo sheet-music. I had a couple of tutors and could not make heads nor tails out of it...and this is very similar.

There's nothing in this to tell you what the position notation means. Nothing said about counting tuplets (other than a 6 means a 'tupolet'). How do you count a quintuplet or a septuplet? Both are notated in "Flying Cloud Schottishe" (and wrongly, I think, in a couple of spots). This kind of stuff used to drive me crazy.

I'm working on "Flying Cloud Schottische" simply because it is a familiar tune and this version is full of crazy stuff that looks nothing like the tune I'm familiar with....and I want to hear those septupolets...

Permalink Reply by Richard William Ineson on November 24, 2020 at 6:25
Does anybody know how to count quintuplets or septuplets or any other tupolets? If so can you let the rest of us know please

Does anybody know how to count quintuplets or septuplets or any other tupolets? If so can you let the rest of us know please

Permalink Reply by Richard William Ineson on November 24, 2020 at 13:41
I understand the principle but I've no idea how to count quintuplets or sextuplets, fortunately you don't come across them too much in banjo music, there's a quintuplet in Hunter's arrangement of the 'Duet from Norma' I think, and that's about it.

You clap your hands in a steady beat and start by dividing it into 2, counting aloud. Then change to 3. Then back to 2. Now divide each 2 in half so each hand clap becomes divided in 4. Then you come to 5. It's not as hard as one might think. The trick is to keep the hand clap steady. A metronome may help. Sextuplets are arrived at by dividing each of the three sub-beats of a triplet in half.  One Two Three, One Two Three, One and Two and Three, One and Two and Three. Then give each *and* a number and you get One Two Three Four Five Six. This is how it is done. Percussionists all over the world learn to do this early on.

I understand the principle but I've no idea how to count quintuplets or sextuplets, fortunately you don't come across them too much in banjo music, there's a quintuplet in Hunter's arrangement of the 'Duet from Norma' I think, and that's about it.

This theory is all very well and good, BUT it is easier to use word syllables :

All of this is being reviewed by the committee to determine who will get the prize.

Because some of the syllables in "hippopotamus" are generally held longer than others, that word works better for 7 or even 8 beats. Say the H word with equal length of each syllable and you'll sound like a robot or like a Macedonian or Russian phone caller pretending to be American  trying to sell you a bargain price to clean your air ducts or warning you that dare hass been suzz pish iss actee Witty in vol fing your so chill sa coooritee nomberrrr.

This theory is all very well and good, BUT it is easier to use word syllables :

Permalink Reply by Richard William Ineson on November 24, 2020 at 20:47
I'm from the 'kick and rush' school of banjo playing, we don't bother with niceties like this, we just do it. I aim to get 40/50% of the notes right, some people aren't as fussy as me.

Permalink Reply by Richard William Ineson on November 25, 2020 at 15:13
Jody, do you have any influence with the Committee?

LOL, "Flying Cloud" is a hot mess. Mis-marked tuplets over two voices. I can't get them to align because musescore insists they work out mathematically. Jean White had to have been hiding behind the door when math skills were handed out (I didn't see him but I was hiding behind the same door).

The first measure has 14 beats, subdivided by two rhythmically identical bars of 7 beats each. The first is bracketed and marked "3" (triplet) and the second is bracketed and marked "5" (quintuplet). This is not to even mention that the notes are drawn as 1/32 notes.(demisemiquaver for you Brits). This structure occurs throughout the piece but the tuplet marking varies from 'missing' to 3 to 6...none of which I can make sense of.

The second measure makes a bit more sense as it actually has a bar that is a septupolet. Apart from the wrong note values, and the fact that the bottom voice doesn't really align as shown...

There's some other nonsense going on. One measure (three staves from the end) of 8, 1/16'th notes has a fifth-string flag which has a "6" attached. Perhaps it is a wandering tuplet...but it has 8 notes, straight time for that measure.

I do like Ian's syllabic method. The septupolets got me looking for 7-syllable words to make the attempt. Google suggested words like "pivalylbenzhydrazine" or "hydrochlorothiazide". Those make my tongue hurt. "Encyclopedia" made me start singing the tune from the Mickey Mouse Club (I'm old, ok!?)

..but they didn't use it as a septupolet and it actually speaks more to Jody's points.

I may be stuck with the inevitability and unattainability of underrepresentation for zoomusicology!

I was waiting to see what you came up with.  I could not get it to sound like anything but a mess.

The Yankee doodle is fun.

I was excited about "Texas Ranger's Waltz" but upon playing it was disappointed.  "Buzz of the Wheel" is a great title of a tune as well.

It seems the only thing this book did well was yank pieces out of earlier tutors.