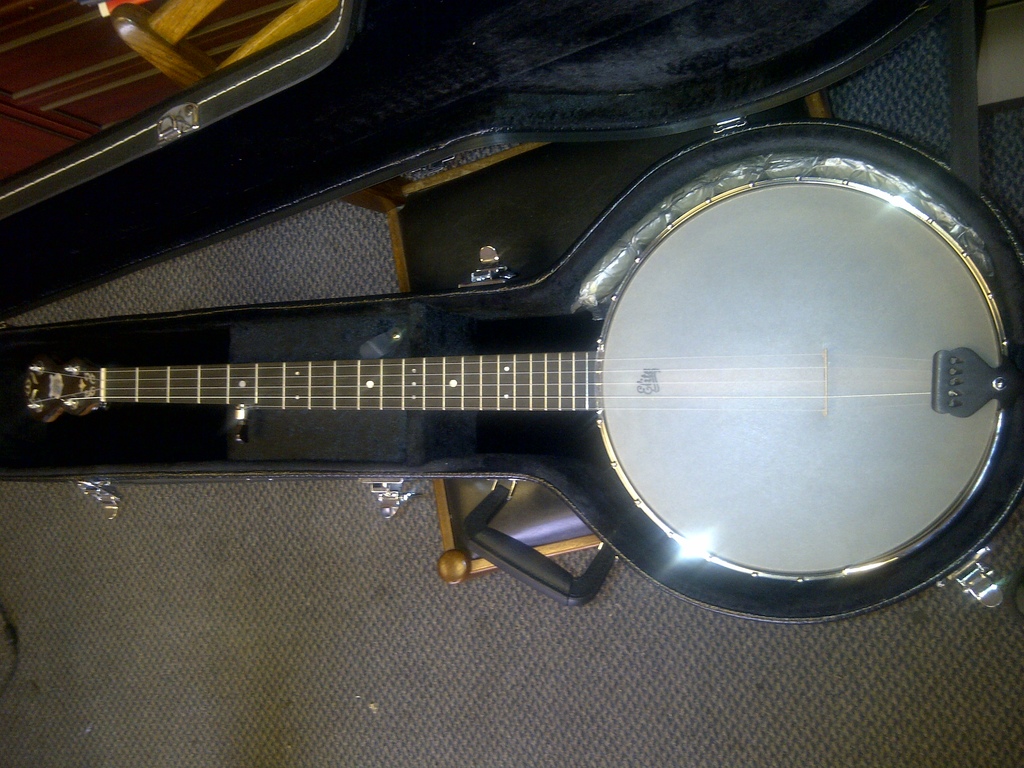 My CE Weaver arrived early doors this morning. It is absolutely superb!  The workmanship is of  the highest  standard. The hand carved mahognay neck is beautiful. The inlays are just right - just as Alfred liked them. The 12" wood hoop gives the 'jo power and tone.

The guys who make these instruments are our luthiers Garry Silbert in Suffolk and Dean Price (north of Watford!).

It looks wonderful! This is definitely going to be my next 'jo!

That is one fine looking banjo. I do like hardwood tone rings, my Flesher's is ebony and I think it helps the sound a good bit.

Are these still made? What are the present thoughts about them?

Yes indeed! Mine has matured nicely - always a pleasure to play.

What is the scale length?  I notice it's got a full 3 octave/22 fret neck, and for a 12" pot, that puts the bridge (usually, depending upon scale length) inappropriately (by Golden Age banjo designer's views) close to the middle of the head more like a clawhammer banjo as they are in style now.

I'm asking because for a product made by "Clifford Essex", it's a very non-classic banjo sort of design construction and more geared to the current clawhammer craze of mellow/low attack bridge in the middle of the head/mellow sounding scenario.

Do you have thoughts on how this would compare to one of the older bridge closer to the tailpiece instruments in attack, sustain, and overall projection/mellowness?

So far, I've only seen clawhammer banjos built this way so I'm curious how it compares to the older system...or wait, I think Jody's Eric S. Tubaphone is like yours in this respect.....?

My Eric Stefanelli banjo has a 28 inch scale, 22 frets, and the bridge far from the center of the head.

.or wait, I think Jody's Eric S. Tubaphone is like yours in this respect.....?

Bridge placement on a banjo, especially a gut string classic banjo, is pretty much like the bracing system in a guitar.....it's how you voice the instrument, other than soundboard thickness/graduation....

I'm puzzled at Eric and "Clifford Essex" doing something like that.

After struggling with this for a long time I have decided that on my banjo projects for myself, to get the tonality that I believe is....authentic or whatever word I can't come up with....true to tradition....that having a large pot just means giving up some high frets, and if I want 22 frets, I'll use an 11" banjo.

I have thought about this a lot, and likely this isn't something most reading this will understand, but neck angle resultant from it's vertical position on the rim affects string break angle over the bridge (which affects downpressure on the soundboard) so the higher the neck is mounted, the worse this gets....it has an effect on things very much like moving the bridge more to the middle of the head as it lessens downpressure on the bridge.

So, making a traditional fretboard extension compromises string break angle (since the neck must move UP to allow the thickness of the extension to go over the head), which is something I feel strongly about NOT doing on classic banjos.  I realize some old banjos have extensions....some I feel were compromises like the Fairbanks and Cole Imperial....the extension is so long, if they did not let the bridge be too far to the tailpiece, there would be no where for your right hand to work.

This leads to either giving up some frets as the Golden Age folks GENERALLY did, or trying to fit a Van Eps style extension to a larger pot...BUT the Van Eps was a raised head, so there was room to have a normal neck vertical position on the pot with the extention being thin and "tucking" nicely into the outer angled raised head portion of the head....which of course, you can't do with a "flathead" banjo without raising the neck vertically more than if there was no extension.

The only other solution to 22 frets on a large pot with proper bridge placement is a VERY long scale.

I don't understand the modern trend of moving bridges to the middle of the head.  Bluegrass, classic, or clawhammer, it takes the "snap" and banjo ring sound and lessens it and makes the tonality "warm" and less distinct.  MAYBE in some clawhammer styles I could understand this....the other 2 styles I don't.  It's the opposite of what most of those styles are about for the most part.

It just takes the voicing of the banjo out of the traditional classic banjo voicing/tonality, and the pioneer makers very very obviously took this into account on all of the myriad combinations of pot sizes, scale lengths, number of frets, extension or not, etc....

There are reasons the engineers and designers of things in the past, especially the leading ones, did what they did.  I've learned, like many violin and guitar people, to be very careful about changing an established standard that has a long track record, and not second guessing them without long and deep thought and testing....which so far in my lutherie experience, as well as in other disciplines, usually leads me right back to the established standards.

I for one wish them all the luck in the world with their banjos.  I have played on one of their necks fitted to a real Weaver rim and it is very good.  Feels right and plays fine.  It was built at the precise direction of the person contracting it and things like scale length and neck angle (of zero) were all chosen for them.  They did a fine job with the reneck.

I was criticized when CE first announced their new company using the old name.  The first offering was a pretty generic openback that was more or less built on Gibson proportions (size and scale).  The rim was a block rim (which I believe this one is) and the neck was attached with Gibson style rods.

This "Weaver" model uses a fake dowel that bolts on with a wooden version of a dowel.

What I was criticized for was asking why they did not go the route of clad rims (CE and Weaver for CE made some of the best clad rims I have ever seen or played) and dowel stick construction.  I understand that it would be very expensive to reproduce Paragons or Concert Grands, but they could have adapted common Vega WL style hardware to copy the Concert Grand.  Clad rims were made by many people in single person shops (for example, Weaver, early SSS, Clarke, FVE).

BUT the fact is, there are more original CE banjos than there are people to play them (heck I own three and I try not to collect stuff).  And the prices on models like Professionals and Metal Hoop Specials are VERY low.  Much lower than they could be made new.

Weavers are pretty rare, but not THAT rare and if one really wanted one I bet they could get their hands on one with a little networking.

Add that there is virtually no market for classic era banjos currently and I'm not sure I would even want to get into the new banjo business, esp., attempting to sell to classic banjoists.

AFA modern "old time" banjo changes, I am all for it.  I think it is about time that "old time" banjoists got banjos designed specifically for them.  It took quite a while for "old time" to have any effect on banjo design at all.  Now that there is a market for it the small builders have been very observant to the wants and needs of "old time" banjoists.  And that is fantastic.  It is modern and when presented as such that is fine.  When presented as a historical sound it is presentist and irresponsible.  But as relatively recent development I am a supporter of it.

Right, and that is why Eric did NOT voice my banjo with the bridge near the middle. The bridge is in the typical Golden Age position over toward the tailpiece.

Bridge placement on a banjo, especially a gut string classic banjo, is pretty much like the bracing system in a guitar.....it's how you voice the instrument, other than soundboard thickness/graduation....

I'm puzzled at Eric and "Clifford Essex" doing something like that.