Maybe a naïve question, but...how exactly did banjo orchestras work, musically speaking? I ask because I haven't found any recordings or sheet music collections. Were people extrapolating from published compositions for solo/duet banjo? Or was each band coming up with its own arrangements of popular tunes from outside of what we now recognize as the classic banjo repertoire? Given a part for 1st banjo, how would one go about deriving parts for banjeaurine/piccolo banjo? I would guess that piccolo banjo mostly doubled the lead melody, but what role did banjeurine play in an ensemble context?

This gives some information: http://forgottenwisdom.org/banjoorchestra/music.html

Thanks for the link to forgotten wisdom. What a great site. I've seen lots of ads in old journals such as Crescendo, Cadenza and S. S. Stewart's for banjo orchestra music. I haven't been able able to find any in the digital domain. I know some of the banjo orchestras were led by composers such as Paul Eno and Thomas J. Armstrong, who would have been capable of writing arrangements.

Thomas Armstrong wrote a series of articles on arraigning for banjo club that was published in the Stewart Journal.

While "banjo orchestra" is the name that academia has decided to focus on, "banjo club" seems to have been the most common in use. With arrangements, think of them more like local brass bands as to me that is how they come together.

I'll post a sample of a piece published by Stewart when I get home.  For some reason, not a lot of these are extant (or at least, extant that we know of, they could be locked away in a collection destined for the recycle bin when the collector passes).

The ABF has some original publications, but not a lot.  Much of the pieces we have played have been arraigned in the style by a member.

And yes, it seems that many clubs did their own arrangements. Before the era of the anti-noter, most locales had one or more persons that would teach popular instruments and were capable of arraigning for amateur clubs.

Most of the extant publications are in A notation.  I have only seen one publication for club from Clifford Essex but I know he did more.

By the time C notation was adopted the mandolin club had sort of taken over and the regular banjo was on decline in popularity.

To me, there are two different arranging styles: "Club Style" and "Orchestral Style". As has been said above, "Club Style" is likely to be the most prevalent. I haven't read the Thomas Armstrong articles in many years. Maybe Joel can be talked into extracting and presenting them here?

A Club arrangement usually is set up so that everybody plays all the time. It is more of a social thing...like a jam. Nobody is left counting rests and if you don't screw up too badly, nobody really cares.

I only have a couple of club arrangements. I don't think the orchestral style was popular enough to be much published...I would expect they were usually unique to the orchestra.

With today's software, creating an arrangement for the banjo club isn't all that hard (it isn't easy either). Usually if I have a 1st and 2nd banjo part, I can extract melodies or harmonies and assign them to the various sections. Cello parts are often just derived from the 2nd banjo bass-lines or just thumping along on 1s and 5s. Piccolo banjos are shrill and they tend to stand out far above their physical size. I imagine getting a club PB player to drop a dynamic or two would be difficult. ;-). I have a hard time writing piccolo parts as I don't like them "on" all the time due to their shrill nature...and I tend to think orchestrally anyway.

Banjeaurines tend to be assigned to typical violin melody parts. I prefer 1st bj to play note-for-note harmony with the banjeaurine, if possible and 2nd bj to provide chordal rhythm in the background. Since I play Viola, I tend to assign 2nds to Viola-typical parts.

Listening to "Let it go" on the Forgotten Wisdom site, I'm reminded that Club arrangements tend to be cacophonous. Everybody is playing all the time and the melody is often difficult to find. Generally (again, my opinion), the more banjos you get in a club arrangement, the less music you hear. OTOH, I think Club arrangements are more fun for the players.

I've been working (less than diligently) on some arrangements derived from piano "four hands". Each hand becomes a banjo part (Banjeaurine, 1st, 2nd and CB). This works out pretty well if the original piano arrangement isn't too busy/complicated/difficult. Joel (I think) uploaded a Stewart pub. of "Spanish Dance #2" by Moszkowski...and it is part of 5 dances (Op. 12) that were published in the 1880s for piano, four hands. I found that only 2 of the 5 (#1 and #2) are really playable in a 4 banjo Club arrangement...the other three are just too difficult for the non-virtuoso player in my opinion.

Armstrong's big thing was divided bass, where the cello plays the roots on the beat and the 2nd banjos follow with the chord.

As someone who has played piccolo in a club setting, the piccolo part is dialed back. With marches I am often playing the trills that one hears a wind piccolo play.  In my experience, they were careful to not over play it.

Here is Aurora March, this does not have the cello part.

Hal Allert transposed "Aurora March" into C Notation (if anyone is interested). It is in the library here. I'm not sure if he re-arranged anything from the original.

Arranging a CB part for it could be as simple as just reading from the 2nd bjo part. Hitting the bass notes and doubling any walk-down/up sequences would do very well. And, as you said, you could re-arrange the 2nd (and add CB) to follow Armstrong's divided bass format. I tend to prefer the CB to play a 1-5 (if possible) on the beats with the 2nd bjo hitting the chords in between. Sometimes it is fun to mess around with any runs, inverting them in the bass, etc.

Although I have a few club arrangements, I didn't differentiate them in their file names. No idea where they are.

Re: Aurora March, am I correct that the "Solo Banjo" part refers to banjeaurine? Is that because the banjeaurine carries the main melody for most of the piece? I also wasn't aware that banjuerine notation is transposing, but I suppose it makes sense.

It also looks like the piccolo banjo doubles the 1st banjo a lot, and the banjeurine here and there. Would it be safe to assume that if you have two piccolo banjos, they typically play the same part?

Yes, the "Solo Banjo" part is written in E and A while the rest is written in A and D. The bass note "C" in the Solo Banjo part actually sounds an F (which is the lowest note on the Banjeaurine, tuned cFCEG).

Generically, multiples will play identical parts in club arrangements. However, some arrangements (or conductors) may indicate/choose 'divisi', which allows the section to divide the part...especially if the part is chordal in nature. For instance, the better player might take the top two notes of the chord while the other player plays single on the bottom notes. This is often decided by the section lead or simply an agreement between the section players.

If I know there will be multiples (or a section) and I have a score that is chordal (and doesn't get too noisy) I will often notate a divisi option. In my arrangement for the Spanish Dances, the bass (left hand) part is often parallel notes (octaves, thirds or fifths) and I notate a divisi option if there are multiple CBs.

I've searched for and found this arrangement of Cammeyer's 'Sammy on Parade' by Bernard Sheaff who was Cammeyer's 'star' pupil and who collaborated with Cam on, in my opinion' his best work, 'Marche en Passant', 'Down Devon Way', Danse Bizarre', 'Two Cornish Dances' etc. Bernard Sheaff met Cammeyer during the 1st World War when Cammeyer and his wife lived outside London, I think that 'Sammy on Parade' was written during the war years and that Sheaff probably made this arrangement for banjo orchestra at this time. 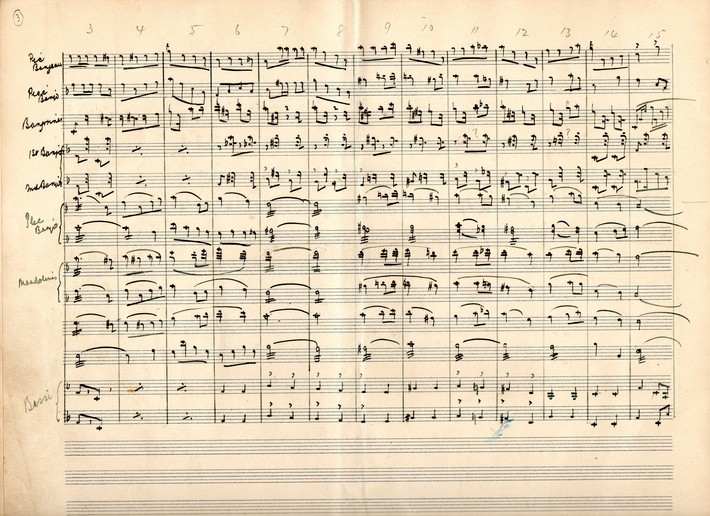