A great ragtime composition from 1911 by Harry Austin Tierney. My friend Steve Harrison and I have arranged this for Classic Style banjo.

I live in Blackpool, which is situated in the north west of England. It is a popular seaside holiday destination boasting amusements, fresh air and fun! One of the earliest and most famous attractions was Uncle Tom’s Cabin, an early “theme park” offering music and dancing provided by travelling minstrels. 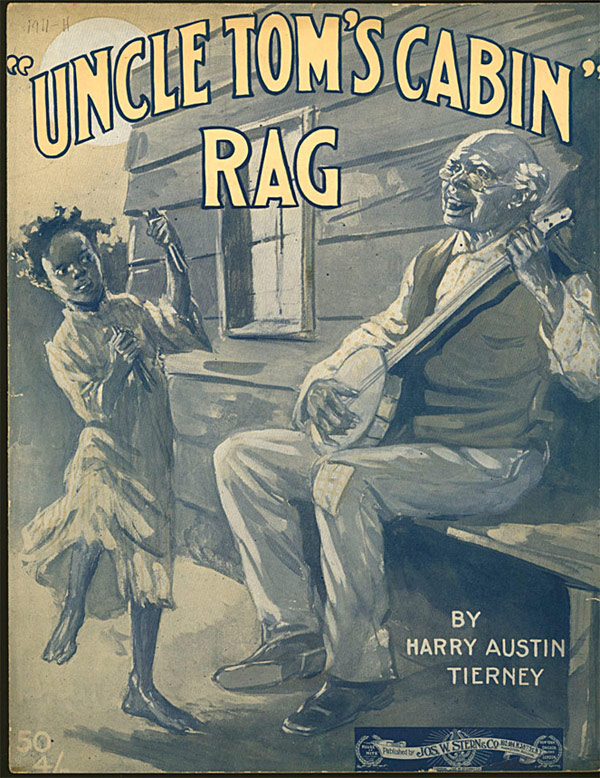 Landowner Thomas Parkinson, who was known locally as “Uncle Tom”, built “The Cabin” in the early 1800s.

It operated from the 1840s, but found its best times some forty years later. Unfortunately “The Cabin” had been built on the edge of the crumbling North Cliff and later had to be abandoned. In 1905 the business was transferred to a new building on the Queen’s Promenade, where it remains today as a pub and entertainment centre. The original building was demolished in 1908.

In early 1851 American, Harriet Beecher Stowe first considered writing some sketches that would inform the world of slavery as she herself had seen it. These were published as the book “Uncle Tom’s Cabin” in 1852, some several years later than the original Uncle Tom’s Cabin had been founded.

Steve Harrison and I have arranged Harry Austin Tierney’s 1911 composition “Uncle Tom’s Cabin Rag” for classic banjo and I have produced a score with full finger notation and also, for those banjoists new to the classic style and would like to give it a try, a TABLATURE version too.  It has a couple of long finger stretches in the first section but these are possible even with my stubby little fingers :-)

Why did I chose this one?... because my good friend Daz now owns “Uncle Tom’s Cabin” here in Blackpool !!

I have added a fully fingered score, and a score with TABLATURE to the MUSIC LIBRARY.

All I can say is... wow. This is probably one of the most effective rags I've heard played on the five-string banjo, and what a rag! A great piece of music, your performance really brought it to life. I can't imagine the amount of work you and Steve put into this, it's one of your most polished arrangements to this day imho.

Comment by Steve Harrison on November 3, 2013 at 12:19
Hi Ian..what a great performance, you and Lynne have obviously put lots of extra work unto this and the final score is excellent. I agree with Mike, it suits the banjo so well it could almost have been written for it....Steve.

Yup, Bravo all around. Neat tune and as raggedy as they come. Some serious stretches there...makes my hand hurt just watching. ;-)

Is 10mm enough for a neoprene  'swiming suit near Blackpool ? Then we get what is locally known as "Illuminations Weather"... and they all get blown down and destroyed. So in answer to your question... 10mm of neoprene is not enough, you would need an overcoat and scarf as well.

Love the rag....love the genre of music. I have been a bluegrass picker for about 5 years. Have only recently discovered "classic banjo". I'm happy to practice all styles, but want to make sure of the "hows" and "whys". Ergo, why the finger pic-less style that seems to be required of classic banjo?

Tones from Deering Sierra 5 string are brighter and more balanced when I use finger pics. Is there an action, ie string spaced above the banjo head that is suggested?  Thank you for your help and keep up the wonderful work.  Pip pip

Hi Douglas, if you want to use fingerpicks playing Classic style, feel free to do so! Rob Murch and the late, great Tom Barriball did, so who's to stop you? ;-) Rob plays with a trad band and he gets great volume that way.

Now, the reason why most of us don't use fingerpicks is because we're after a specific tone -- many of us are looking for a short, snappy, characteristic tone as heard on the old recordings, and that is best achieved with bare fingertips. Fingerpicks give a clear, ringing tone with more sustain which is often not desirable in Classic style.

However, it all boils down to personal preference.

Got it....and have notice the tonal difference....pics seem to offer more "overtone" as in classic voice and piano with pedal...But I do hear the snap you suggest that sounds "older" as in early recording techniques of any music. Neat!...and thanks for your response.