Here's something to ponder. I recall a (probably apocryphal?) story about Sigismond Thalberg and the banjo, which seems to have been taken up by a number of banjoists in the mid-late 19th century, and it is generally agreed that they confused Thalberg with Gottschalk. This is not, however, the Thalberg connection I have in mind right now.

I was going through the sheet music for some of my favourite Thalberg pieces and it struck me how similar some passages are -- including figures, ornamentation, how the melodies are woven into the harmony -- to some of Farland's pieces/arrangements, especially in his "three hands" passages, thumb melodies with arpeggios or sustained notes.

Just how popular was Old Arpeggio 20 years after his death? What kind of feedback was there between him and the banjo? His characteristic virtuoso figures seem to have had a huge influence on Farland's style. Was there any influence the other way round? I know Buckley dedicated a piece to him in 1868, but Thalberg died three years later. 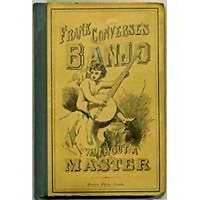 I would presume that Mr. Converse knew his Thalberg from his Gottschalk. This connection is outlined in the preface to his "Little Yellow Book" (you can read it online or I can send you a pdf scan from my original). From what I've been able to read, Thalberg actually took up the banjo and composed some pieces for it. Much was made (in the banjo world, salivating for a bit of "approval" from the upper-crust) of this connection to a well-regarded "classical" figure.

Otherwise, I cannot really speak to the influence he had on other players or vice-versa. I suppose he was looked upon as a "friendly" and therefore had some weight among banjo players of the period. I'm acquainted with that passage, but I believe this arises from a bit of gossip published in Dwight's Journal of Music in 1857. I believe it to be an unlikely story, as Thalberg only toured the United States from november 1856 to june 1858, and the person writing the story claims that he never actually heard Thalberg play the banjo but that he had "taken ten lessons". And considering that he only stayed there a year and a half, and toured over 80 cities during that time, it is unlikely that he "long devoted a share of his studies" to it!

Well, of that, I have no doubt. It is really simply advertising hyperbole. The author (Mr. Converse) was looking to legitimize the banjo and what better way than to invoke the name of a "rock star". Of course in that period, one didn't require the story to be true in any sense of the word...

I don't think that Gottschalk had the press (in the period) that Thalberg got. Thus, Mr. T would have been the obvious choice to add an air of legit. to any musical publication...that he had even a tenuous connection to the banjo would have made it even more likely.

I do think that Thalberg had a strong influence on the public at large and that "Thalberg-like" cadenzas would have been pretty common in every genre after his tour...probably for decades thereafter.