I've been asked for information by a friend in regard to her late grandfather's banjo playing. From the photos she has emailed me the banjo the family have is clearly a Windsor Popular 7 zither dating from the late 20's or 30's. Not remarkable or unusual (or valuable) as such, but nice to see that it's in immaculate as-new condition. That suggests that her grandfather (a coal miner) would likely have been playing a classic banjo repertoire.

More of interest to me, though rather off the edge of my own knowledge and banjo map, is the sheet music. 'Cromartie Polka March' and 'Fanfare des Dragons Galop' are two titles. Can someone shed any further light on these tunes?

The family are not looking to sell the banjo, their interest is sentimental and seeking information about their grandfather's playing.

Bolton is just down the road from Grandfather!  I wonder if he is there? This is what we term a "porthole" z-b and basically was  the last "innovation" that Windsor's made. I would say it's mid to late '30's

Or maybe he could have gone  the other way down the road and joined the Liverpool BMG ? 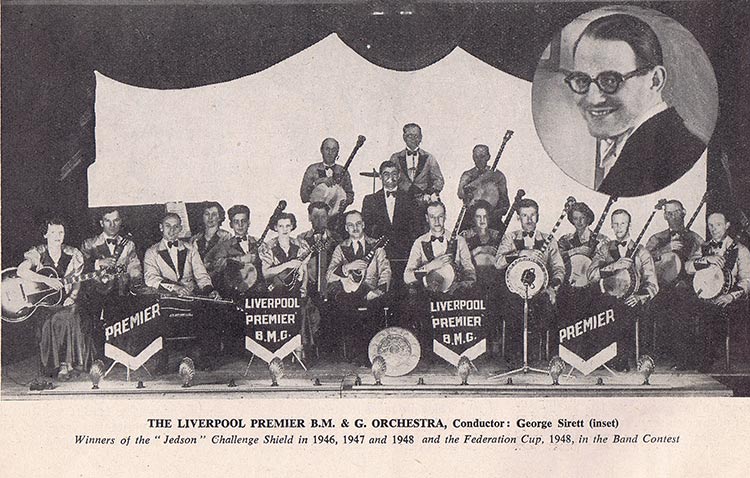 Well, we know Wigan had a "Boat Express", surely they had an Orchestra!


Added for you Marc.. Ian

Hey Marc you bring back memories. I was born about a mile from George Formby's "original" house named Beryldene in Poulton-le-Fylde, near Blackpool. 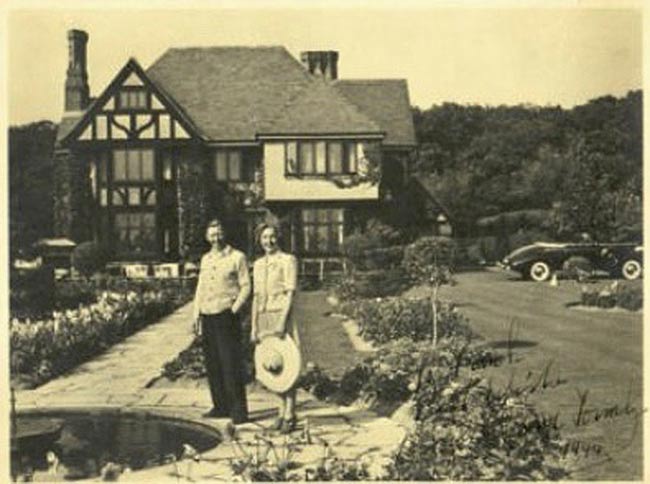 He later moved to another house in Lytham St. Annes that he also called Beryldene and where he ended his days.

I am sure that David Wade must be right about there being a banjo presence in Wigan.  Over the years I have bought THREE banjos that I have seen advertised for sale in Wigan, I am so lucky that all of them are TOP of the range and in beautiful condition. 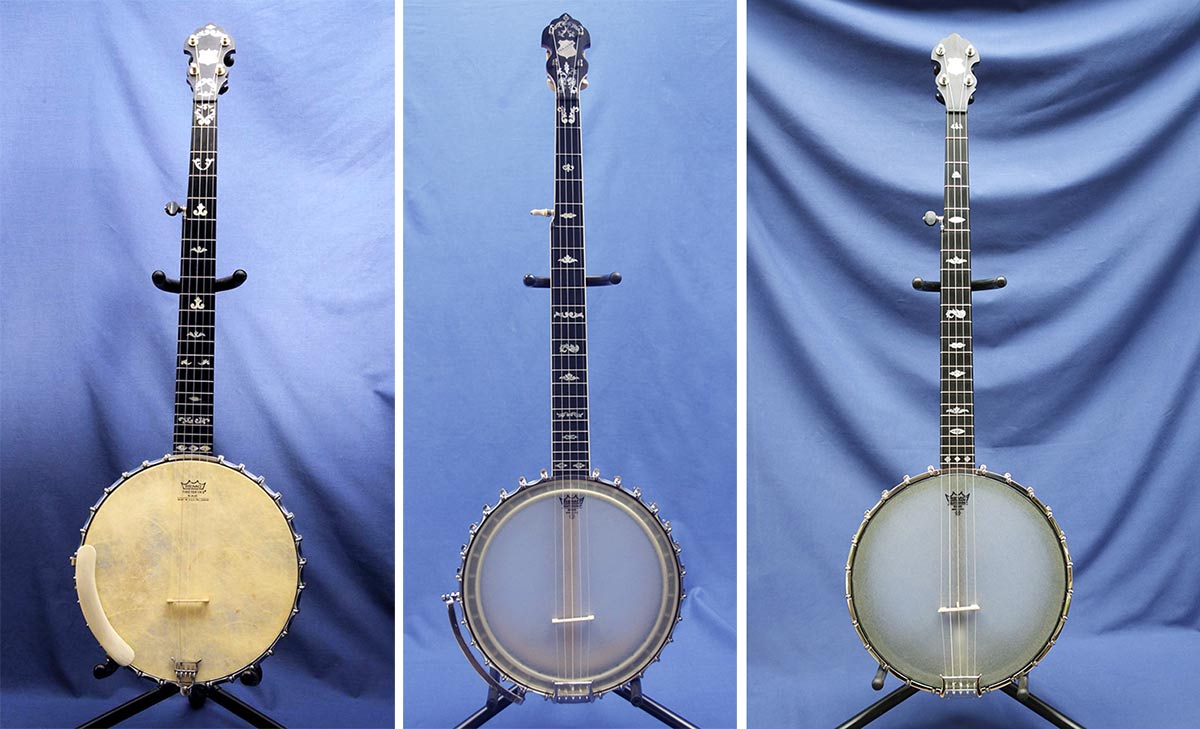 I can only assume that these would have been purchased by dedicated banjoists as they would never have been cheap instruments... so maybe they were from an orchestra????  I guess "Grandad" died and these were sold from the estate. I know that it was the case with two of them.

Access here is spotty at best. In my previous reply, I had no "buttons". This time, I have buttons...go figure.

Formby = Fun. I can't imagine how y'all would pronounce "Beryldene", much less "Poulton-le-Fylde"...but I'm sure you would laugh out loud if I attempted it.

Fascinating photos of the post-war orchestras. I'll see if the family can spot their grandfather in either.

That's a lovely trio of Clifford Essex banjos. I have a CE Clipper, and though not one of the more expensive models in the range it is very sweet banjo with great tone and a joy to play.

All the CE & Windsor Banjos are very good , even from the lowest entry models & grades .  the design and ornementations are simple but Always very good  pots / rims

I don't think context has been addressed.  I will take a guess.

Zither banjos were supported by the same classic banjo tradition that regular 5 string banjos were a part of.

Zither banjos were an innovation on the old Dobson patent closed back banjo where Alfred Cammeyer (an American banjoist) changed the strings from all gut with a copper wound over silk 4th to three wire, one gut and a wound over silk forth as well as using the novel tunneled 5th string.

The main difference is that music composed specifically for the zither banjo makes use of the different timbers of the mix of wire, gut, and copper wound silk.

With that said, any regular banjo music can be played on the zither banjo and vice versa because they are only different in the material of strings.

Chances are very likely that the original owner of this banjo was influenced by the same popular music that was responsible for the sales of most if not all 5 string banjos from the 1880s-1940s+ in England (late 1870s-1920s in the US).

One of the pieces, as I noted, was originally composed and published in the US as "On The Mill Dam Galop" by A. A. Babb in 1888 (Gatcomb).  It was nearly as popular as George Lansing's "Darkies Dream."  It sold extreamly well and was issued in C notation by Walter Jacobs in the 1910s.

British publishers were very fast to plagiarize US music, and this a prime example of that.  It is a good easy piece that the ABF still plays as a group number during rallies.

It is safe to say that the owner of this banjo bought it to play the popular music that was being published, played and recorded that is now called "classic banjo."

I would also be so bold as to state that the original owner likely found inspiration in the recordings of Olly Oakley (search Youtube for some of his records) who was quite famous as a zither banjo player.

Context is what interests me. I'd like to give the family an idea of the musical environment their grandfather might have enjoyed in the 1930's and 40's. My conversations with them haven't brought to light any suggestion that he was in one of the many performing bands. He may just have played at home as a hobbyist. Were there clubs and societies where classic players met and played in their local community or workplace?

Local activity can be highly influenced by the efforts of an individual mentor or teacher. In general was classic banjo in England in decline in the 1930's, stable in numbers or was it undergoing a resurgence of interest? Did interest and involvement vary significantly by region? With the advent of jazz and swing how common was uptake of classic style banjo by young working class men?

What did a Popular 7 cost in 1930? That would give a comparison of the outlay in relation to an average miner's wage. 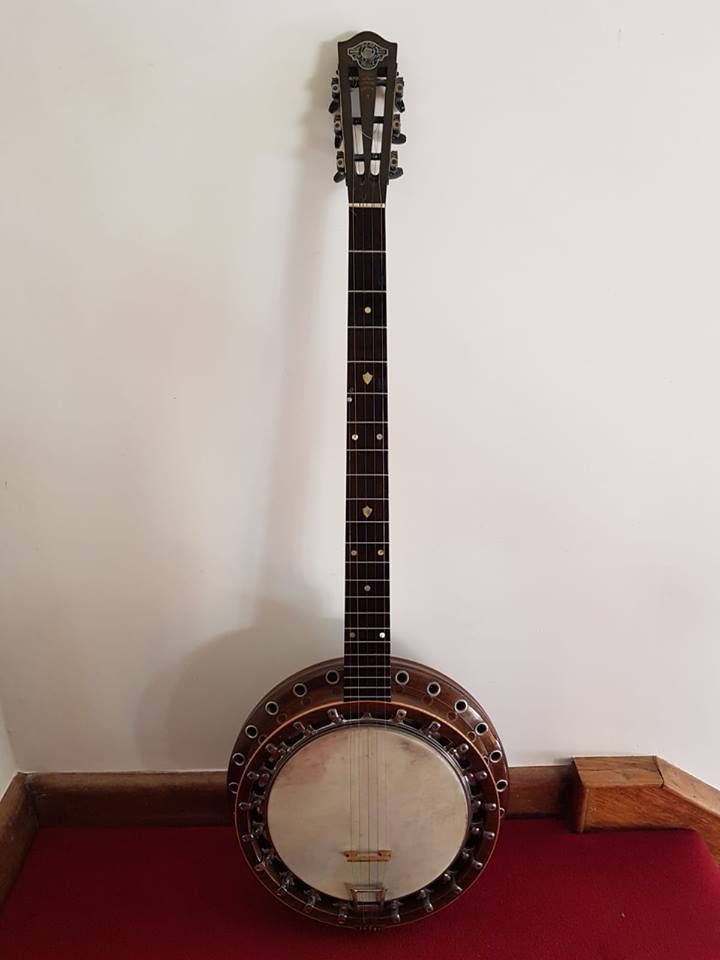