Notes and directions in sheet music...

Ok, I'm pretty good with English music directions, understand (or can look up) Italian and German. And, I've seen quite a bit of sheet music in my time.

Still, I've never seen anything like this. I may have to start playing 2nd Banjo, they get all the cool jobs! 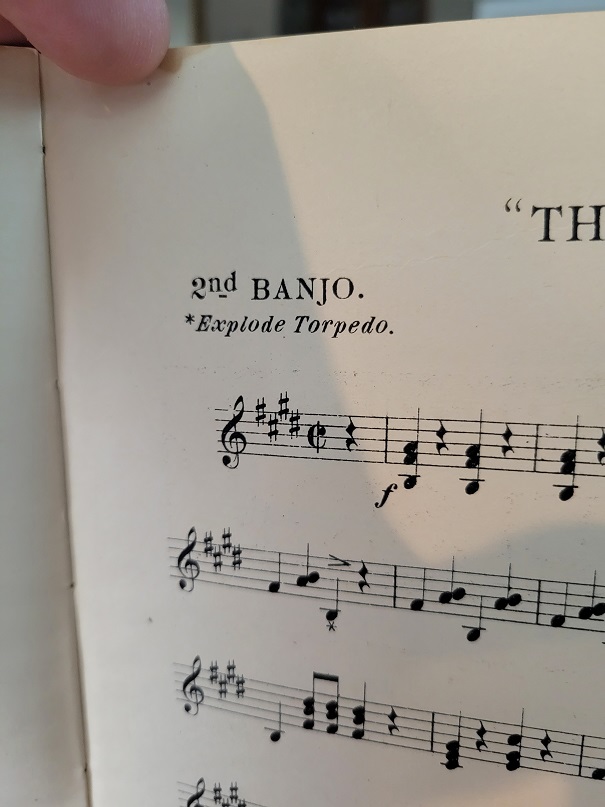 My google searches are not turning up much before Korea, but it seems that the 999th was all Black.

My google searches are not turning up much before Korea, but it seems that the 999th was all Black.

I had not thought to look up the unit number. I know enough about the period military units that there were none numbered above about 150-something. The SpanAm war saw many volunteer units but they were usually converted National Guard and kept their state affiliations.

"999th" was probably chosen so that it was obviously not a real unit. Of course, It would not surprise me if it were indeed some kind of lost racist joke.

As far as the torpedo goes, any explosive device (apart from artillery shells) was called a "torpedo" in the period although submarines were being developed (TR rode in one, ca 1905). I'm assuming this one would be a stage cracker. It is exploded at the end of the introduction and at the end of the first volta. No idea how one would fire such a thing in time with the music. My imagination sees the 2nd banjoist as a cartoon character, shrouded in smoke, collar and sheet music askew, having had something blown up in his face.

This piece is in an A-notation collection I just found buried in a box. I'll be sending it to Joel for scanning and then anyone can attempt the piece. Just don't blow yourself up!

PS, the piece was written by George Barker...anyone know of him? He wrote several pieces in this collection and one of his is currently on ebay for nearly $90.00. Buy it now...

Slide whistle and a thunder sheet?

I have a box of noise makers (wind whistle, thunder tube, slide whistle, Acme train, Acme duplex-steamboat, Acme Siren, bones, slap stick, etc.) I'm sure we could put something together that would work.

Here's the mp3, transposed to G/C (C notation). Not a bad little march, Pretty easy. I can hear them singing in the trio: "In The Nine-Ninety-nineth artillery"... Sorry, no explosive effects..

The Acme train whistle is better, the steamboat is a little shrill (can you tell that I like Acme whistles?).

What surprised me was the Remo thunder tube.  A piece of pipe with a fiberskin head tacked to one end with a long spring coming out of it. Got it for $9.  It gives a very impressive thunder sound, from distant rumble to strike.