I have been chatting to my friend Rob Murch and he sent me a Youtube link to a recording of the "Kentucky Minstrels". There is much singing, plectrum banjo and "Mr. Punch" as the one piece of Classic Style playing.

BUT WHO IS PLAYING??  I have my idea, who do you think?

This reminded me that site member Anthony Peabody wrote his MA thesis on Joe Morley and in there was a section about Morley's time with the Kentucky Minstrels. I have added a piece from his work below.

In 1933, at the same time as the successful shows of White Coons were running, Harry Pepper and Doris Arnold, (who Pepper married in 1943) conceived the idea of a revival of the blackface or “nigger” Minstrel show. Pickering (1996, p161) said that only Pepper and Arnold had any great faith in the success of the Kentucky Minstrels, but the show proved very popular.

Kentucky Minstrels was an openly blackface troupe, but with the obvious drawback of radio rather than a visual medium. The radio performers could not be seen, but might be visualised by the listener. The format was very similar to the White Coons, but had a slightly more formalised structure. Black American performers were engaged, which helped to set the authentic “Minstrel” scene. The singer Ike Hatch, and the comedians Scott and Whaley became the staple performers. Scott and Whaley also appeared at the seaside, where Scott, lugubrious clown wore distinctive white lipped minstrel make-up, and were well known as such. Transferring this image to a non-visual radio medium was therefore, less of a problem (Pickering 2011). The first singer was Aubrey Pankey, now little known, but who was a classically trained black lieder singer who emigrated to East Germany.

The Kentucky Minstrels and a black lieder singer do not, at first glance, seem suited to each other, but Pankey’s only appearances in the British Press are with the Kentucky Minstrels. The 1930s may have been more relaxed with a Black American in a Minstrel show than as a lieder singer. Although the ethnicity of the black performers could not be seen on the radio, advertising material from the Radio Times during this period shows them clearly.

The Kentucky Minstrels differed from the White Coons in offering a banjo trio, originally Joe Morley, Tarrant Bailey Jnr, and Dick Pepper. The latter played throughout the life of the Kentucky Minstrels, and because banjo playing was an inherent part of the blackface “ethos”, the trio was kept up. Tarrant Bailey Jnr. stepped down in November 1935, and his place was taken by Edward Fairs. When Morley stepped down in February 1937, his place was taken by Bernard Sheaff. 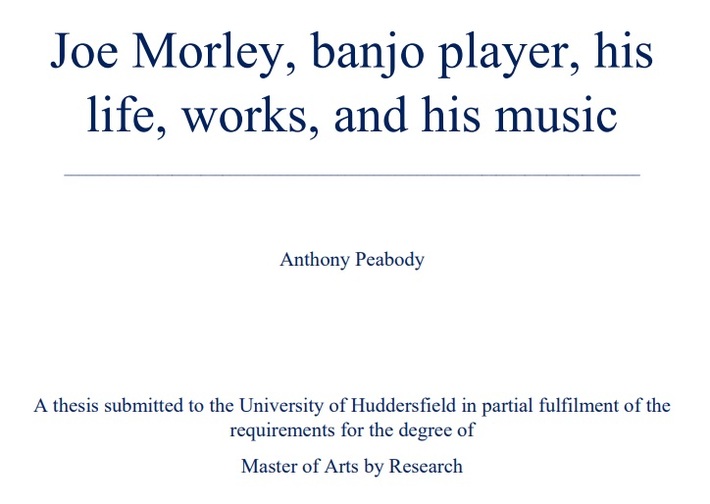 "Joe Morley, banjo player, his life, works, and his music"

can be viewed online here:

Since they were all Morley's followers, I have a very hard time discerning any difference between TBjr and Morley. "Mr. Punch" sounds very much like Wm. Ball's rendition too. Hard to get apples to fall far from the tree...