Or Californian Dance or Dance California. My copy of the Clifford Essex sheet music has Burt Earle in the area where the composer's name would usually be, bu...

Or Californian Dance or Dance California. My copy of the Clifford Essex sheet music has Burt Earle in the area where the composer's name would usually be, but what Essex appears to have omitted were the words "Composed by George Gregory, arranged by Burt Earle". Alas, not the only example of musical piracy from those times.
Some of the triplets and twiddly bits were probably added by Alex Magee (1880 to 1967), one of Gregory's pupils who at the age of 16 was billed as "The Boy Wonder".

Very interesting! George Gregory had a tragic life, first suffering from paralysis of the hand and eventually killing himself due to financial problems. If Essex pirated the sheet I would assume he did so in the early days, when he and Cammeyer had a habit of taking popular numbers by Armstrong et al and publishing them as being "arranged" by a sham name.

Cammeyer did eventually redeem himself by composing some of the best music for the banjo... I still think these vitriolic comments about his name are very funny, though (at least, I think it's Cammeyer?) The "allegro vivace" movement of a cat fight... CaMMWEYOWR!

Another great performance by "Our man of the East" ! Again, a tune that I had not heard before. I love Tony's smooth, flowing and relaxed style. Those rapid runs seem to be effortless, and without a single gurn or grimace so familiar from my playing. Tony makes even the difficult bits look easy... a rare talent :-)

Recently a new member, who had received one free lesson, complained at their lack of progress. I suggest that they ask Tony how he plays so well, but I know the answer PRACTICE, PRACTICE AND MORE PRACTICE !

I have added the score, with piano and second banjo to the MUSIC LIBRARY and have added G. Gregory as composer as we Brits like to do the right thing, don't you know?

The name Esssss Exxxxx  can also be made to sound like cats. Everyone knew that Cam Meower was American. The "ghoul" is said to be European. ( America is *a* continent but *the* continent usually means Europe). So perhaps someone else is meant.

I have many reasons to believe it was a reference to Cam Meower. As you pointed out, HisssEckssss is ruled out, as it is implied that the editor is not actually an Englishman, but a "good imitation" thereof. The notion that he might be from continental Europe is unlikely, as a foreign surname would not qualify as being "effectually disguised" -- the name must be Anglophone. The other publishers of banjo journals at the time did not have very catfight-ish names: Barnes&Mullins (The Troubadour) and Dallas (Dallas' Musical Monthly). Turner, with Keynotes, would come later.

I would like to introduce into evidence Exhibit "A" which is a collection of sheet music originally written by Mr. Armstrong and entitled "Normandie March" and "Love and Beauty", and published under an assumed name and modified title, with Cammeyer credited as the arranger:

These two are echoed in Stewart's, Jun-Jul 1895, with a reference to Cammeyer's Banjo World: This was followed by another incident in which the pieces were plagiarised again, this time by Turner's, using F. Cecil Folkestone's real name once, followed by Folkestone with a fake first

(Cont'd in my next post due to character limit)

From the above it appears that it could be either Cammeyer or Turner/Folkestone.

However, here comes the clincher: Cammeyer was "found out" by Feb-Mar 1895, with a clear reference to the "ass in the lion's skin", to his nationality, and to the fake Newberry composer name you can see on the sheet music posted above:

Followed by yet another reference to him in the same terms, two years later, in 1897: 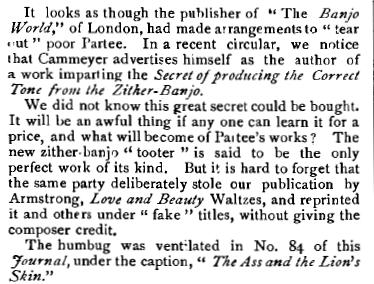 I rest my case!

Comment by TONY BRYAN on November 25, 2013 at 21:26
Ian, your kind comments are very much appreciated. I know it might seem as though all I have to do is sit in front of the camera and rattle off another banjo piece, but that's all a front. What you see is normally the result of at least half a dozen takes after a week or more of working up to it with daily run-throughs. The stuff that is on the cutting-room floor contains all the face-pulling and groans and memory blanks. I did one a few weeks back that was absolutely perfect and all I had to do was the coda - and I totally forgot the last chord! I never managed to repeat the fault-free rendition. One of these days I will post a director's cut so you can see the warts and all. In the end, you have to select the recording that contains the least number of imperfections and hope no-one will notice them.
As you say, you can only get there by practice, practice and more practice. You have to do it often enough so that the pathways in the brain are hard-wired. And you can only do that through repetition. Unless, of course, you were born a natural banjo player, as was Maestro Tapis himself. But that's another story.

Also, great info Mike!  Where can one get the scores for the famous Normandie March/Love and Beauty?

I've got them in three editions, all in C notation, two by Turner and one by Cammeyer. Ironically, the ones with the best editing are the "fake" ones by Cammeyer with the changed names and so forth, as the Turner editions eschew the snaps, 5th string flags, etc., and use an inferior/less legible typeset. The "Love and Beauty" waltes strike me as a far better composition than "Normandie March", which is a bit bland and banal as far as banjo marches go, but the waltes seem to have been composed with a banjo ensemble in mind as the solo part is a bit dry without the accompaniment. I've also found, surprisingly enough, a guitar arrangement of the same by Walter Jacobs, which is much more challenging.