I was taking a flight out a new terminal at San Francisco the other day and was surprised and amused to see the shape of some comfortable new benches with a new shape.  Off topic because they look like plectrum banjos? No indeed, these are Zither Banjo Benches!  I'm afraid my mobile phone takes horrible quality pictures but at least the shape was captured. The wave of the future?

clear photos of the missing banjo

Note the copper bass string, the red binding around the pot and the inlay "The Cammeyer Vibrante Royal" These are distinctive. 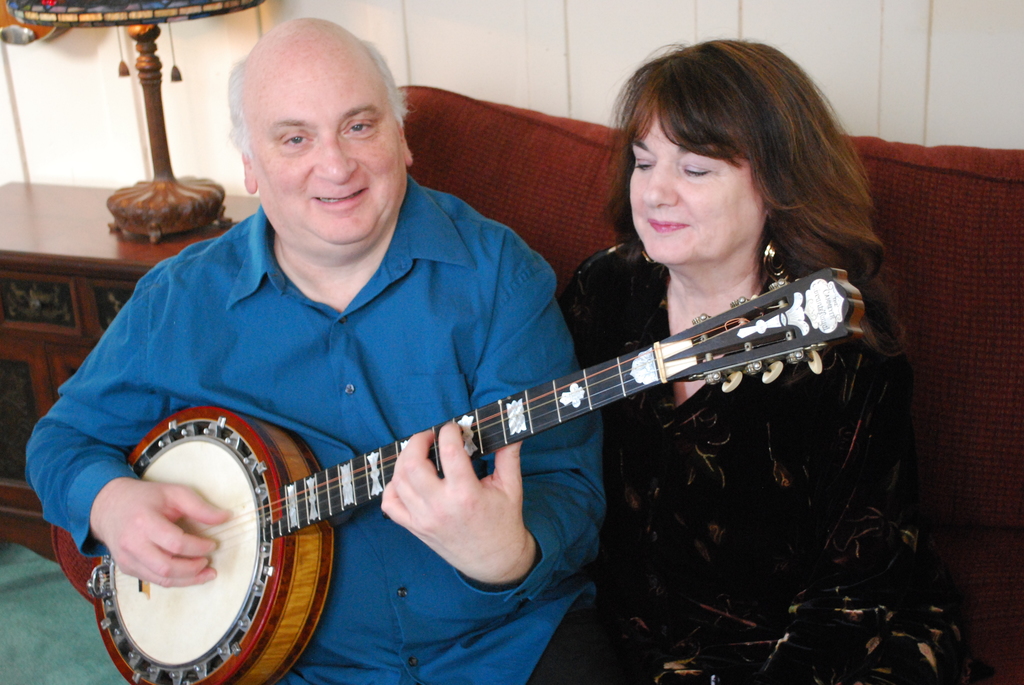 My Cammeyer Vibrante Royal zither banjo did not make it home after a Secret Life Of Banjos concert in Berkeley, California last night. It was in a brown hard English case, the kind that is straight on one side and round on the other, odd looking. It must have been taken during the packing up of the car outside the venue. The case has a name (now forgotten) and the Canadian address of a former owner hand written on the outside. If anyone sees the banjo or has information please let me know. I am… Continue

I've posted two recordings of Darkey's Dream. John Pidoux excels in the slow section, the fast part is played well but the accompanist is dragging and has no sense of time. The fast section by Ossman has better support. The recording is pretty noisy though. Being able to share audio recordings is a benefit of the audio player feature of the $500 version of the ning package.

Had an interesting experience this morning. I got a last minute call to do a two hour recording session at a small local studio to play banjo for an iPhone ap (whatever that is) connected with a children's book about a freight train. I brought along a steel-strung Gibson mastertone bluegrass banjo and a 1918 AA Farland Concert Grand strung with nylon strings. I took out the Farland first and after hearing a few random bars of St Louis Tickle, Home Sweet Home and A Banjo Revel, neither the… Continue

Here's something you don't see often, an original Van Eps 5 string banjo complete with satellite dish, hole in the vellum, aluminum fingerboard extension, and a 28.5 inch scale. And at a price that reflects its rarity alas. I've seen a few Van Eps tenors for sale but not many five strings. http://bernunzio.com/products/0914098

Joint Effort at Transcription and Arrangement of Ragtime Oriole

Over the last few weeks, Ian Holloway in Blackpool and I in San Francisco have been tossing a ball across cyberspace creating a banjo arrangement of Ragtime Oriole based on the early 1950s recording of Fred Van Eps. Van Eps kept the original piano key of A flat and so have we. Basically we listened and transcribed and refined each other's versions and filled in the gaps left by the other and corrected our mistakes over time. I initially tried to be faithful to whatever I could discern of Van… Continue

The Oriole Has Landed

A search for banjo, banjoist, Tarrant Bailey, etc, on the website :


will produce about a dozen film clips of British banjo playing including solos by Tarrant Bailey Jr.

OK, I've posted Ragtime Oriole, transcribed by DL Miller in 1951. It's in the original piano key of A flat and is pretty close to the Van Eps 1920s recording. Look in Photos.

I've posted an audio file of Baur's Twisted Rope. I played it from memory and got lost in the music and accidently repeated some lines and also dropped some mini-beats etc, but this has the feel I'm going for more than a more perfect rendition I also played.

This is a great resource. Good music and a free ride on a time machine

Two mp3 files of Return of The Regiment

Joe MacNaghten and Return of The Regiment

"Return of The Regiment" was recently suggested as a tune of the month or season or something, (good idea I think) and music was posted by Dave Wade who today also posted a photo of Joe MacNaghten. This provokes a question that some of the English players here might be able to answer. It might be a case of UK and USA being "divided by a common language" but I've looked at the dots, listened to the recording of Ernest Jones playing Return OTR and read what "Mac" had to say about it and hit a… Continue

The Eagle Has Unraveled: Frayed Aquila basses in Nylgut set

I use Aquila Nylgut sets on several banjos and am happy with the feel and sound but there comes a time when the winding on the bass starts unravelling and this is always before the plain strings have died. Has anyone else had this problem? I also use Aquila's D type copper wound on nylgut for zither-banjo bass and the problem exists there as well. I wonder if those here with an Aquila connection can put in a word about this?