I've read Cammeyer's account of how he developed his zither banjo and that is not what this is about.

I am curious about when the first production zither banjos hit the market.  Basically, when was Joe Public able to saunter into a local music store and buy one?

Here is our timeline.  Cammeyer develops his zither banjo all on his own with no influence from Dobson closed back banjos, despite him growing up in New York City, where one could not spit without hitting a Dobson advertisement.

This seems to make no lasting impact on anyone in the US and he clicks around on it until he moves to London in 1888.

In the Journals and Song Albums section there is the first issue of the Banjo World from November 1893.  The zither banjo is mentioned several times, including the names of people who play them.  There is also the standard warning against buying zither banjos made by other people.  The way they treat it is as if it is common.

So, perhaps Cammeyer started making headway with his zither banjo by 1891?

Is there any clear period documentation on this?  Seems like it would be pretty easy to narrow down a before and after with access to period magazines and catalogs (which I don't have).

The British Newspaper Archive has some references in 1890/1 to makers Arthur Tilley, John Hutton, Charles Hudson and J E Dallas. The Cammeyer zither banjo was apparently available from the Piccadilly Banjo Studio of Herbert J Ellis in 1889. Richard Spencer and J Clamp are mentioned as makers in 1893. Interestingly, in later advertisements Dallas is claimed to be 'the original inventor and maker of the zither banjo'. He clearly did not invent the term but perhaps the standard model adopted for the zither banjo was different in some way from Cammeyer's original design.

A thread on this site from 2014 titled 'A Step Back In Time' has on page 4, a link to an advertisement for Professor W E Ballantine, teacher of the banjo (7, 6 and 5 strings also zither banjo) guitar and mandoline. There is also a testimonial dated October 1888. It may be of interest to you.

I don't know how to put the link on this reply, so I hope you can find it in the archives.

Not really my era but I have these print references to Tilley's zither banjo from The Yarmouth Independent, 14 Jun1890 and Reading Observer, 13 Dec 1890. The zither banjo lessons offered in West London in 1892 are not the first, but include the comment that the instrument was already 'fashionable' at that date (but it does not specify among who or how widespread). Cammeyer was performing solo concerts in England throughout 1889 on his own zither banjo.

It seems that Tilley's delivery to your door approach beat Amazon to it by about 120 years! 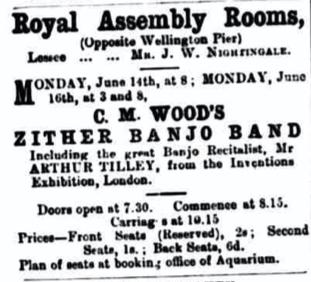