What happened to FRETWIRE Magazine? 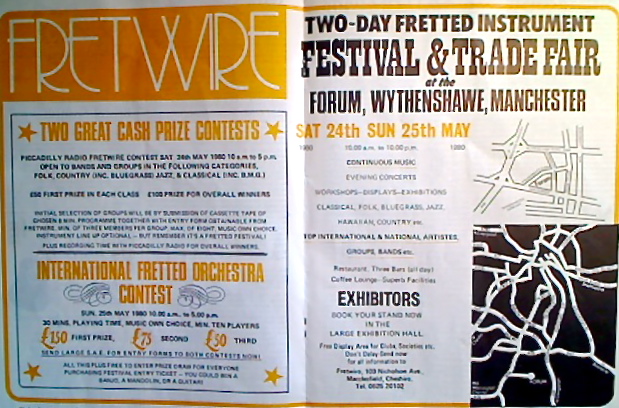 I was being taught Classic Banjo in the 1970s-1980 by Chris Sands here in the UK and at that time there was a magazine called FRETWIRE. They organised some very large events including this International one held in Manchester UK. I played at this event and then put the banjos back in their cases and under the bed, where they remained until a couple of years ago. I wonder if anyone attended this event (is there anyone else THAT old?)  or know what happened to FRETWIRE?

This is the event that permanently put me off Bluegrass playing. All players were stuffed into one small "warm up" room and this is where I was surrounded by approximately two hundred Earl Scruggs clones who's lack of talent was only compensated for by their volume and speed. Imagine a room full of Bluegrass players all playing a different set of licks and rolls at the same time, while I was trying to tune up..

Brian Jacklin came to see me sometime in the 80s, Fretwire had closed down by then, he told me about the circumstances of the failure of the magazine, - someone had started a rumour that Fretwire was closing down, when it was actually still making a good profit, there was also some dispute with W.H. Smith who were distributing the magazine at the time ( I may have the details wrong here, it is a long time ago) there was a lot of skulduggery involved which resulted in Fretwire going under. Brian lost everything he even had to sell his banjos.

I saw Brian's daughter Shirlee Stahl last night at the orchestra rehearsal.  He did not get rid of them all Richard, Shirlee brought a Paragon that used to be his.

As I said it's a long time ago.

Yes It is Richard.  Nice to see the Paragon however.  Needs a good set up, but otherwise OK.

Are you going to Backwell at all?

Yes, I am already booked in, I am looking forward to it, I am going to bring a banjo if I can find one, I think that Pat Doyle will also be coming as his hand seems to have recovered.

Excellent - I look forward to seeing you and Pat.  I will update this site shortly withy details of the community tunes etc.  Will and Pat be putting together a nice easy quiz for us all Richard?

I'm writing up some history of the BMG Federation for the newsletter and would like a picture of fretwire magazine to include. I can only find pictures of very low resolution and wonder if you would allow me to use this picture of yours as it's of better quality. Do you still have this magazine as maybe you could email me a photo of the front cover as I would also like to include the front of fretwire.

I have several original editions that I can scan for you.

I have several original editions that I can scan for you.

Thank you very much Ian. However I've just accessed the zip file and I see the images are in tiff format which I can't edit so I will need to have them as jpg files if it's possible please. Sorry about this. I love the front cover with Hugo D'Alton and I wonder who the other player is with him. I think I have information about him as I know he had a partner and that Eileen Pakenham wrote a duo that they played together. I recently learnt about that.