I have just heard the sad news that Gordon Dando passed away in hospital last Thursday after short illness. The funeral will be Thursday 10th November at Bath Abbey.

There will be full tribute in the next BMG magazine but I'm sure some of our list members will want to share their reminiscences of grand old man of the banjo.

Richard Ineson sent me an email regarding the sad loss of Gordon Dando and I have added the photographs of Gordon and send my sad condolences.

The sad news has just reached me that Gordon Dando, the well known Bath banjo player and antique dealer, has died at the age of 94. Gordon was a lifelong supporter of the banjo over many years and attended and played at, the Backwell Banjo Rallies up to a couple of years ago.

In his real life Gordon was a well respected antique dealer, his business, from which he retired in 1993, being founded in Midsomer Norton, in 1915.

Gordon served in His Majesty's Forces during the 2nd World War as a radio operator, and skills learned at this time were turned to use in his banjo activities when he was put in charge of the B.M.G. 'tape club' where he was known as the 'Tapeworm'.

Gordon took banjo lessons from the late Tarrant Bailey Jnr. and was a great friend of the late Bristol banjo player, Bill Ball, with whom he played over many years. 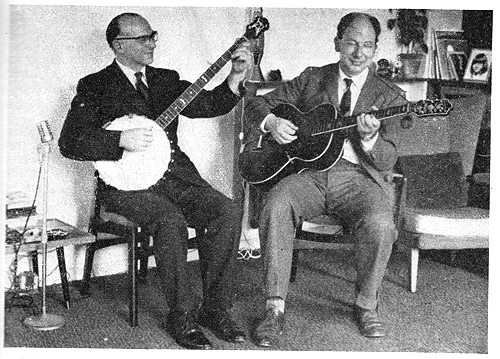 Amongst his other interests was miniature railways, he had built an extensive layout in his garden and often invited fellow rail and banjo enthusiasts to share a day playing with his engines.

A keen collector of banjo and other fretted instruments, he owned one of Eddie Lang's guitars with which he often used to accompany the banjo playing at Backwell, at these events he also played his own arrangements of popular songs with his long time playing partner Terry Woodgate.

Gordon was a very likeable, kind, and affable character who loved the banjo my main memories of Gordon are of seeing him at Backwell relating a selection from his endless fund of jokes and stories to a crowd of banjo enthusiasts before taking the stage.

A true legend of the banjo. 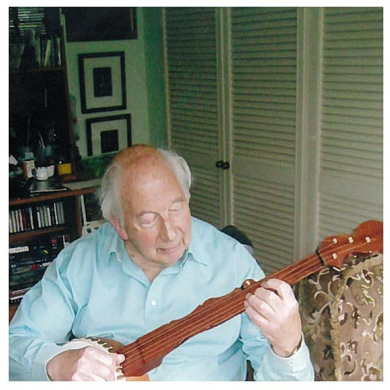 The funeral will take place at Bath Abbey on the 10th November.

Permalink Reply by Russ Chandler on November 1, 2016 at 19:55
The first time I met Gordon I'd just bought some videos from him mail order. I introduced myself to him at a MBF I think, but for done reason he got me confused with someone who'd just ripped him off over a guitar and proceeded to give me a proper telling off!

When I explained that no, I'd bought a video not a guitar his face split into the warmest smile! What a nice man.

For reference the second photo is of Gordon playing my Gourd banjo in Clive Hughes' workroom in the West Midlands.

For those wishing to attend the funeral of Gordon Dando on Thursday 10th November I have had conformation that this will be at Haycombe Cemetery Whiteway Road Bath BA2 2RQ at 1.45pm not Bath Abbey as previously indicated.