As a huge Ossman fanatic...I was on a quest to find a banjo similar to one Vess played. At one point in time, early on in his career, he was seen playing a Morrison with Tommy Glynn, I believe at Madison Square Gardens in the mid 1890s. So, I was able to track down an old beat up, broken, ragged Morrison several years ago. The neck was broken off the pot, the heel cracked and busted, most of the inlays missing, fingerboard veneer frail and deteriorating, frets missing, the pot was so green and rested it was embarrassing. Either way, I wanted this banjo to live again, so my luthier began the tedious task of resurrecting it.

I polished all the metal, most of the plating was already gone except for the pot. Much of the brass has been exposed now, the hooks, shoes, nuts, hoop...oh well. I think she did an amazing job on the rest of it...she repaired the heel so I can't even tell it was broken, leveled the neck, it was slightly warped, installed new ebony fretboard veneers, new frets,  carved new peg-head and neck inlays, repaired a gouge in the peg head and also the neck by the 5th string peg....by using existing wood from underneath the fretboard, so the wood would match...installed a new .011 thick Stern head, and a new set of Savarez period correct strings .017, .019, .023, silver wound 4th, .017.

I think it sound GREAT! However, I am still having trouble adjusting to the action. After researching and asking several of you here about what proper classic action should be, i got different responses anywhere from 1/8"- 1/4". I decided to meet in the middle and try 3/16" at the 12th fret...its about 1/4" where the neck meets the pot. My regular action on my Jerry reed guitars is 4/64"....and my bluegrass banjos are not much higher than that either....so its very difficult for me to go to this "SKY HIGH" action of 3/16"-1/4" with a 1/2" bridge. And then throw in these super slinky light strings....its a challenge for me to adjust to this Morrison set up this way.

I've included some pictures and a video. Thanks to everybody for their insight and wisdom over the years, answering my questions. The video is the intro and outro to "Turkey in the Straw Medley". Although I can play the entire song through, i'm not ready on this banjo. Either way, enjoy! 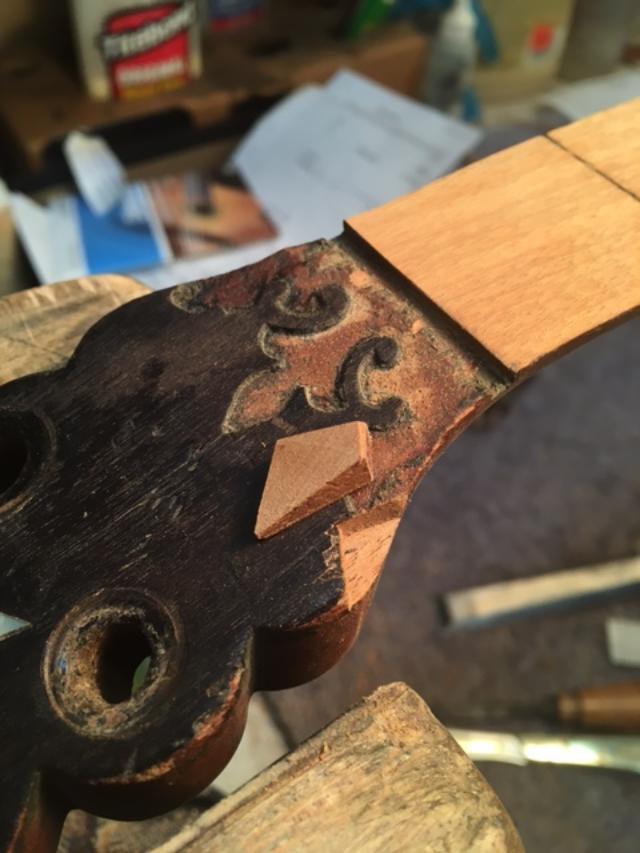 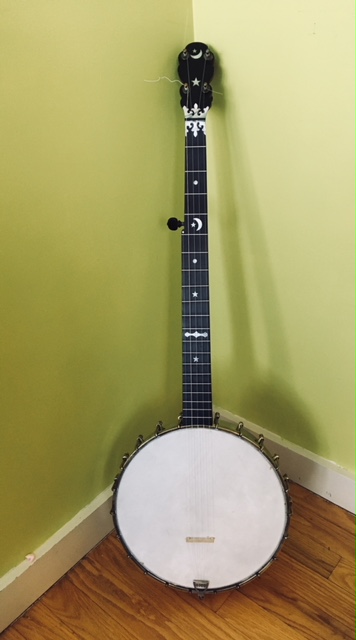 A few more photos. And...I forgot to mention, some of you will remember. But Sam Devere's name is written on the inside of the pot with an old dip pen...no claim that this was his instrument....but the name is there....who knows? 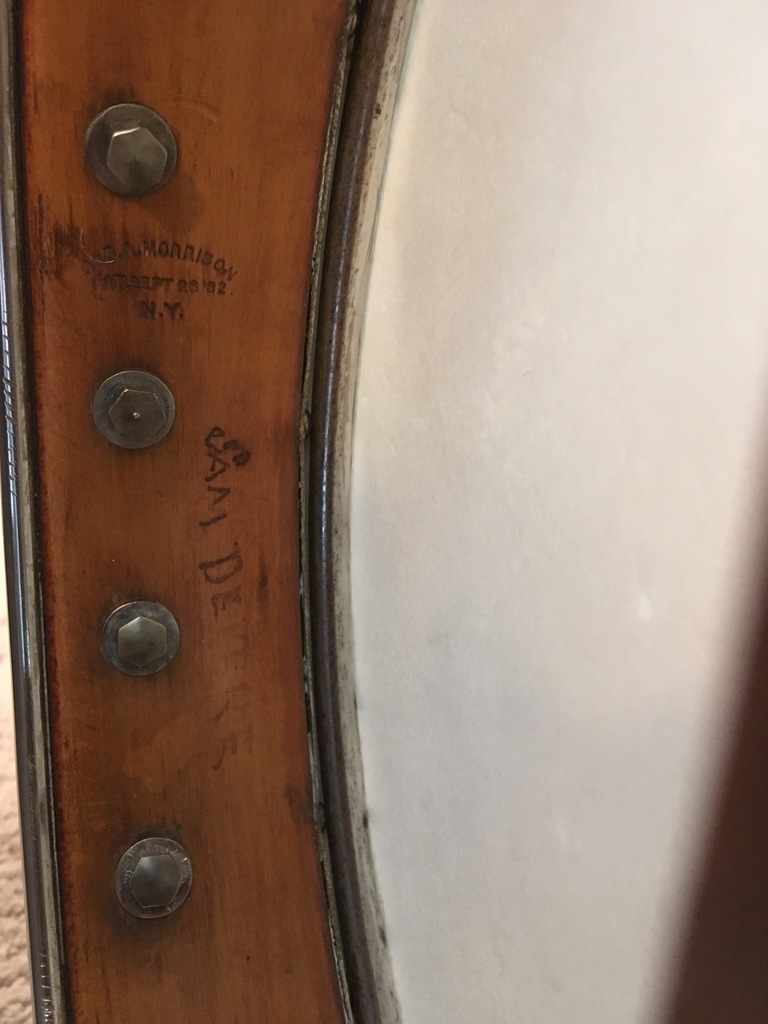 Which type of Savarez strings are you using?  It sounds just right to me.

Thanks Jody! They are the Savarez "Early Period Instruments", plain nylon, i had to buy each string individually, they did not come pre-packaged as set. John Cohen and Joel Hooks both made string recommendations to me, and i appreciate it. These strings are mighty flimsy....but, with practice i'll get used to them.

What did you mean about how I was using my thumb on the "Turkey" segment?

I use those Early Period strings as well but not quite that light.   Your thumb moves like "alternating bass" guitar picking. Merle Travis is the guy for that and sometimes Chet Atkins too.  Not really Jerry Reed style but  if you watch his right hand he'll tend to use his thumb whenever possible. The interesting thing, for me anyway, about the alternating bass thumb style on guitar is that it's a transplanted banjo technique. It's thumb lead TITI (thumb index thumb index) adjusted "geographically" so that the lowest pitch still comes first.

Thanks Jody! They are the Savarez "Early Period Instruments", plain nylon, i had to buy each string individually, they did not come pre-packaged as set. John Cohen and Joel Hooks both made string recommendations to me, and i appreciate it. These strings are mighty flimsy....but, with practice i'll get used to them.

What did you mean about how I was using my thumb on the "Turkey" segment?

Ah I see now Jody....alternating bass. I'm big into Merle Travis and also Chet Atkins....that technique I guess is engrained into my mind and hands after years and years of finger style guitar. Would Vess or other classic maestros not have done it that way? It's just what comes natural to me.

I listed off a bunch of names for people that helped but I didn't say thank you to Jody! He gave me huge set-up information that helped achieve this Ossman sound. And also Ian for his in depth video tutorial on "how to" with your first classic banjo, that information is worth so much, its "invaluable".