You might like to see this piece I did for the current edition of the British BMG Federation Newsletter.  It's a bit out of the ordinary as it is a piece of 'classical' music on classic banjo.

Brilliant stuff Tony!  We tried Skaters' Waltz with our handbell team and gave up very quickly as it is an extremely difficult piece.

Mrs.Thereallyniceman and I even took up ice skating at the time to get in the mood, but she decided to give up after practising our spins. 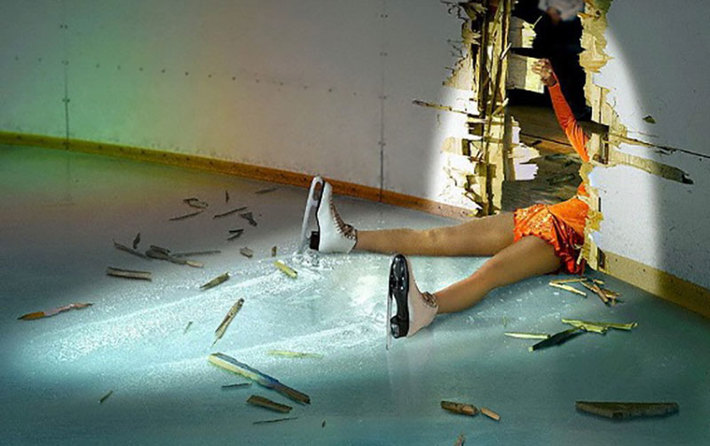 Tony, how you managed skating while playing a banjo I will never know ;-)

Brilliant Tony (made even better by the wintry outfit).

Comment by Richard William Ineson on November 28, 2020 at 8:10
Very seasonal, very nicely played, must get the music out and give it an airing.

Thanks for the words of encouragement.  Is that really Mrs Thereallyniceman lying there amid the debris?  Poor thing!

Anyone thinking of giving this one a try - which I heartily encourage - should go to the arrangement by Emile Grimshaw.  I based a lot of my version on his ideas, but I had to massage it a bit here and there to bring it closer to Waldteufel's original.  Although Grimshaw published this as a banjo solo, the concept seems to have been the banjo part for a BMG orchestra as there are references to other parts in the banjo score.  He also shortened it to conform to a standard recording of 3 to 4 minutes, while an orchestral version can be over 8 minutes.

I tried a few other Viennese waltzes from the period before settling on this one, but they are fiendishly difficult to pull off as the tempo is all over the place and they achieve much of their effect by hanging notes and pauses.  For a satisfying set of arrangements, I would recommend Bernard Sheaff's "Strauss Waltzes", where he takes the playable bits from a number of waltzes and strings them together.  The Strauss's are probably whipping around in their graves when I play this, but not for the first time - they probably react similarly to handbells.

Comment by Richard William Ineson on November 29, 2020 at 13:04
Anthony Peabody saved a lot of the Grimshaw arrangements from a skip some years ago, so if you're looking say, for a 3rd Mandola part or a Domra obligato he's the man to contact.