I got myself a "new" zither-banjo from eBay, pretty cheap, and it arrived today. It all looks good, except for a few things.

First up, two of the tuners are missing the knob. So I'm looking for a replacment (I don't think I will be able to repair it...). Does anyone happen to have a spare set for a W.E Temlett zither (see pics)? When removing the tuners it looks to me as though the tuners on it was not the original. Looks as though it at some point had six single tuners. Could that be? I think I will replace the tuners with moder guitar tuners, until something better turns up (I'm really anxious to play it...) 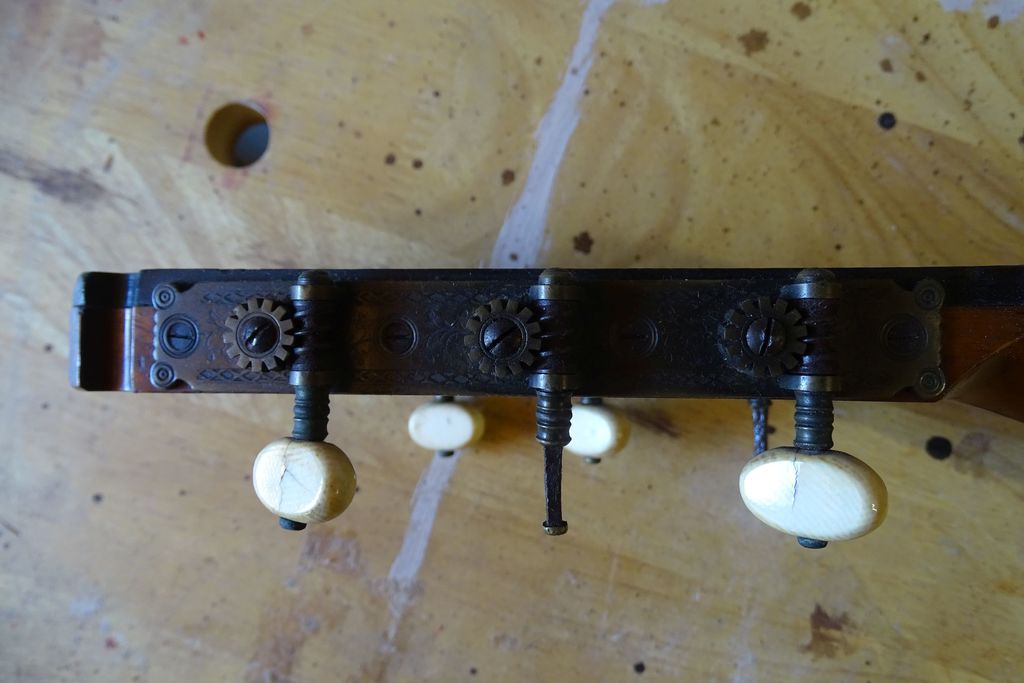 The next thing is the tail piece. There's just no way I could fit an all gut third string through there! Was it designed as an all steel string zither banjo? Was there another original tail piece? 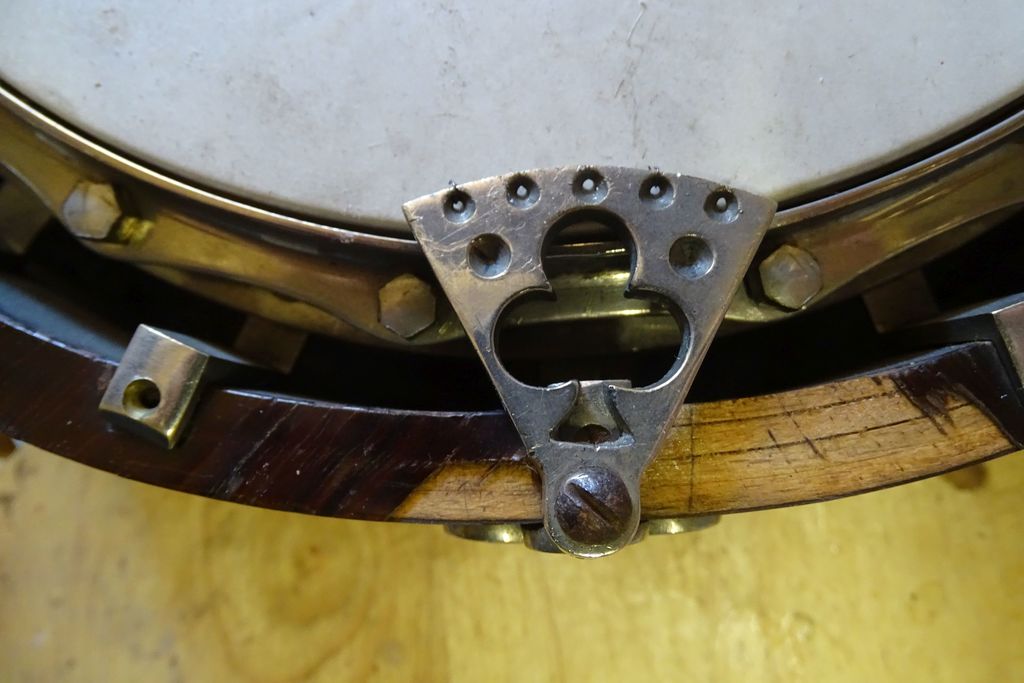 And imagine my surprise when I took the tone ring of and realized that it was only fastend to six of those "holders" (whatever they are actually called...). All the other 10 are only dummies.... And there's a number on the back of the head stock. If anyone have any information about this particular instrument, I would be most thankfull to hear it. I will do my best to restore it, and if there's an interest, post pictures when it's done.

Zither banjos were usually strung as follows ;- 1st, 2nd, and 5th were wire (Cammeyer insisted on unplated wire) the 3rd string was gut (nylon nowadays) and a nylon or silk 4th wound with wire. The zither banjo is different to the open backed banjo in that on an open backed banjo the aim is to get all of the strings sounding the same, on a zither banjo the aim is to make sure that the 3rd and 4th strings sound different - this is because  the melody was often carried on the lower strings with the wire strings providing the accompaniment. Playing the zither banjo in the Cammeyer manner is not just playing the banjo, it's a way of life.

There is a possibility that you are mistaking the modern standards of polyester string sizes as being "period correct."  They are not.  Most polyester (and to a lesser degree nylon) strings are much thicker than what was used during the "classic banjo era."  As much as two to three times thicker with some sets.

I believe that the New Clifford Essex sells sets for zither banjo.  You could also, after some research, order singles from Labella and make your own sets of the proper sizes.

Thanks for your replays, guys!

Yes, I am aware of the different strings for the Zb. I do have the set (with gut) from clifford essex. Still, that hole looked mighty small to my eye when I first saw it. Tried to pull the gut string through though. A bit tight but it did work! :-) I'm not sure it would have worked with nylon or polyester though...

I have it up and running now. Hopefully I'll be able to post a video soon... :-)

Good to know that you're making progress, let us know what happens next.
Pär Engstrand said:

Thanks for your replays, guys!

Yes, I am aware of the different strings for the Zb. I do have the set (with gut) from clifford essex. Still, that hole looked mighty small to my eye when I first saw it. Tried to pull the gut string through though. A bit tight but it did work! :-) I'm not sure it would have worked with nylon or polyester though...

I have it up and running now. Hopefully I'll be able to post a video soon... :-)

So, it's now in playable condition. It's pretty to look at (I just love that headstock!) but probably not very good. I don't have much Zb experience and I don't have my Windsor Zb at home at the moment to compare. I'll post a few pictures.

What troubles me is the hight of the bridge. I had to sand down the bridge quite a bit to land on 5mm string hight at the 12th fret. The bridge is now 12mm (0,47 inch) high(or rather low...) and what I understand from reading a bit, that is to low. Are the zither banjos different in that aspect, that they could still play well with a lower bridge? I think it would be quite an operation to angle the neck in such a way that it would fit a higher bridge and I don't know if it would be worth the effort.

All the best and thanks for looking, This is a very interesting banjo.  It is by W E Temlett, the son of William Temlett an aclaimed English banjo maker, who, in my view, was almost certainly one of the first to use the term 'zither banjo'.  Father and son fell out over the amount of inlay decoration used on the banjos, and W E preferred a much plainer style, as your example illustrates extremely well.  The fact that it bears a number make me think this is a very early example of W E Temlett's banjo making.

I note you have fitted 6-head guitar tuners and this is exactly how most zither banjos were made.  You seem to have resolved the problems of the tail-piece.  My William Temlett Academy model zither banjo has exactly the same kind of 'ace of clubs' tail-piece design.  I use Aquila Nylgut strings and have never had any difficulty threading them through the tail-piece, but I note all seven of the holes on yours are drilled out (presumably for a 7-string banjo) but mine are not.

I was a little concerned that you found your 1/2 inch bridge too high.  It shouldn't be.  This suggests that you banjo needs setting up properly.  If the bridge is lowered too much you risk the strings buzzing or may experience difficulty hitting the fifth string cleanly if you are playing clawhammer style.  I find the Clifford Essex bridge you are using easily the best for this type of banjo.

I hope this has been of some interest you.

Don 't put the original tuners to the garbage , may be , one day , you would like to set it up to the original condition

Yes Marc, I still have the old tuners. Hope to be able to use them some day. Specially since they look so much better than the new ones...

Thanks for your input, Jake. I don't play clawhammer on it so that's not really a concern of mine.

Permalink Reply by Jake Jeremy Glanville on January 22, 2020 at 10:55
Erratum. I left out the letter 'E' when referring to my Temlett Academy model. It is of course by W E Temlet, not William Temlett Senior.
Glad you've kept the old tuners. They are not too easy to find and can be expensive. They are probably repairable by someone who knows what they are doing. I realise classical banjo players may not be too interested in clawhammer, but one never knows, and it can be addictive! The great thing is, you've got a zither banjo to play and cherish, and long may you continue to do both.