Yes. Miz Diane's Amazon orders used to appear on the doorstep as if they had been transported magically. Click the "buy" button and that thump you hear a moment later is the package hitting your doorstep. Now we're looking at a week or two (or three) depending on the commodity.

I think the painters have finished on the house (maybe some touchup tomorrow). If I can get a driveway poured I can at least stop parking in the front yard. Garage doors won't come in for another 3 weeks, if then. Everything is slow (understandably).

Mail is sketchy right now.  We are seeing stuff that normally would take 2 to 3 days go for two weeks.  It is not a great time to ship banjo music.

Okay, so you wanted to know about Alf Wood? He was my great-grandfather, and I've been doing some family research, and this is what I know:

Alfred “Alf” Wood came from a musical family. His family was from Uppermill in the Saddleworth district of Yorkshire, which is on the edge of the Peak District, right on the border with Lancashire, actually nearer to Oldham (and Manchester) than any Yorkshire town. His father, also called Alfred and known as Alf, was born in in February or March 1830. He was married in 1849, in Oldham, to Suzannna Smith, who appears to have been from Bury in Lancashire and they had a son William (later often referred to as W.H.) Wood, in either 1849 or 1850. The 1851 census shows the family living in Blackburn, Lancashire and Alf senior’s profession is listed as ‘vocalist,’ so he was already on the stage. They seem to have stayed around the Greater Manchester area for a while, and their daughter, Mary Ann Wood, was born in 1852 in Salford.

1860 is the first record I have of Alf senior getting any press notice for his work, in the national entertainment paper of the day, The Era, at Milton Colosseum Concert Hall in Glasgow, where "Alf Wood and son, Negro vocalists, dancers etc." (clearly in blackface) are one of the acts. Presumably the ‘son’ in question is W.H. Wood, who was later a performer of some renown in his own right. In advertisements in The Era in early 1860s, the act is referred to as "Alf Wood and his wonderful [or clever, or talented] son," and they seem to have been playing music halls all over the country and finding some success: indeed in the 1861 census has the family living in Chelsea, in London.

However, at some point, things changed. References to Alf Wood and Son in the papers reach a peak in 1863 and then there are none at all in 1864, and very few in (late) 1865, but then by 1866 the act is back again. The 1871 census catches Alf on tour, staying at pub in Grantham, Lincolnshire, but not with Suzanna and Mary Ann. By this time, his ‘wife’ is Elizabeth who, at 26, is 15 years younger than Alf, and there are three children, Alfred (7) - that's the famous Alf Wood - Minnie (5) and Harriet (2). The disappearance from the stage seems to coincide with Alf junior’s birth (in about 1864), which was probably when he left Suzanna.

His new partner, Elizabeth Eycott Norris, came from the Stroud area of Gloucestershire. She was probably an aspiring singer and actress and that's how she met Alf, because she certainly seemed to be involved as a performer and impressario later. Alf Junior is on stage early on as part of a revamped ‘Alf Wood and his Two Sons’. Alf senior and Elizabeth had two other daughters, Julia Ann, born in 1872 and Frances Alice, born in 1874. However their oldest daughter, Minnie Eycott, died at the age of 7 in 1873.

This is when it gets even more complicated in the records. Alf senior died in 1876, at the age of only 46, in Rochdale in Lancashire. He was followed just 6 years later, in 1882, by W.H. Wood and then the next year by Elizabeth. The latter two deaths were both noted by The Era, but Elizabeth Eycott is referred to as the ‘widow’ of W.H. Wood. in fact he probably was; it seems that Elizabeth married her own (unofficial) step-son after Alf senior’s death, probably to give her children legitimacy.

After his father's death, Alf junior continued to be part of the family show, reconfigured as ‘Wood's Minstrels’ and then ‘The Wood Family.’ It seems to have been led initially by his W.H. Wood and Elizabeth Eycott Wood, until their deaths. ‘The Wood Family’, consisting of Alf junior, Harriet, Julia and Frances, became very successful. They toured the Britain and the USA extensively as well as going to South Africa (where Harriet met and eventually married a theatre owner, Benjamin Wheeler) and Australia. Alf became known for his banjo work and lightning caricatures, drawing on stage between acts, and they were all well known for their harmony singing, whether in blackface or yellowface (the three sisters did ‘Three Little Maids from School’, from The Mikado as the most popular part of their act), and there was lots of gender-swapping too.

In the 1880s, Alf met Emma Caroline Long when the Wood Family were playing at the Theatre Royal in Brighton. The Wood Family topped the bill, and she was in one of the supporting acts, theatre owner Mrs Nye Chart's ‘young ladies’ - essentially a chorus girl. They married, after the deaths of William in 1882, and Elizabeth, on September 2nd 1883, in Lambeth. In between touring the USA, Britain and other parts of the world, Alf and Emma had five children. They are all recorded in the 1901 census, together with Alf and Emma, living in Lambeth. By this stage the other two members of 'The Wood Family', Julia and Frances had both moved to the USA permanently (I think).

By this time Alf had become a respected banjo player, solo or in duos, the latter mainly with Fred Manson. He was now known on both sides of the Atlantic and in correspondence with famous players in the USA. He even affected an American origin story in some of his stage shows. In the 1890s he joined Britain’s most famous blackface minstrel troupe, The Burgess and Moore Minstrels, and played with them into the 1900s.

After a good few years with the Burgess and Moore Minstrels, and at the height of his talent and fame, Alf started playing solo again, and writing more songs, routines and gags for others. He was also one of the first artists to record on both wax cylinders and early cardboard-core discs, and at least 40 recordings still exist, mainly on Nicole Records. He also stepped into another influential group, William C. Pepper's White Coons, one of the first groups to play black American music not in blackface.

Alf was his father’s son in many ways, and also acquired a second family. The Era notes a 'two-year absence' from Burgess and Moore Minstrels and perhaps the stage in general between 1900 and 1902, so something seems to have been going on. This was when he met Beatrice Wright, an actress 15 years younger than Alf and, like him, already married and with children, who she brought with her when she started living with Alf. In the 1911 census, Alf and Beatrice and five children are living in Brixton, South London. Meanwhile across town in Hammersmith, Emma and four mostly grown-up daughters were living on their own. And this is the way it stayed through the 1910s and the First World War. Alf made some recordings and wrote some songs during the war, more in a comedy vein, presumably for ‘morale.’

Tragically, Beatrice died in 1922. Alf went back to his old family, and started living with his and Emma's oldest daughter, in Forest Hill in London. Alf continued to write and play into the 1920s, however minstrel acts were not so popular now. Alf had always done a lot of pantomime and he had perfected a comedy female-impersonation in the Wood Family group, so as got older he was in demand in the 1920s as a pantomime dame in the winter season, and in the summer played in one of the few remaining minstrel acts, Uncle Mac's (Summerson's) Minstrels, who mainly played in holiday towns on the Kent and Sussex coasts. He continued to write songs and gags for other performers, including early wireless (radio) acts, and he was also featured on the wireless himself. The last record of a public performance I can find is in 1930. And at some point, he moved to Brighton where his wife, Emma, was living, and they may have had some kind of reconciliation. It was certainly where he was living when he died in 1934.

There's a video of 'The Colonel' playing AW's 78 of 'Wallaby Polka'  on youtube. You might look in the 1950s B.M.G.s for Brewer's articles 'The Banjo in Britain'  a few of which are devoted to British banjoists. There are a few pictures of Alf Wood in the Morley biography on this site. As regards music I've got 'San Diego' (which place I believe he visited) 'Fan Tan' 'Colombo' (nothin got do with the TV detective) and perhaps another
Trapdoor2 said:

Ooooh. Another Alf Wood tune! I find Mr. Wood's tunes to be uniformly enjoyable. I'll have this one jinned up tonight to see what it sounds like.

Maybe I've asked before (and maybe its been answered)...anyone have a bio or info on Alf Wood?

Permalink Reply by Richard William Ineson on January 4, 2021 at 20:05
Very interesting, thanks for clearing the mystery of Alf Wood up, was quite a man!

Permalink Reply by Trapdoor2 on January 5, 2021 at 5:20
Aye, an excellent family history. Humans are funny creatures...

Permalink Reply by Richard William Ineson on January 5, 2021 at 8:16
David, have you any photographs of Alf Wood or any of his banjos or other souvenirs of his career? 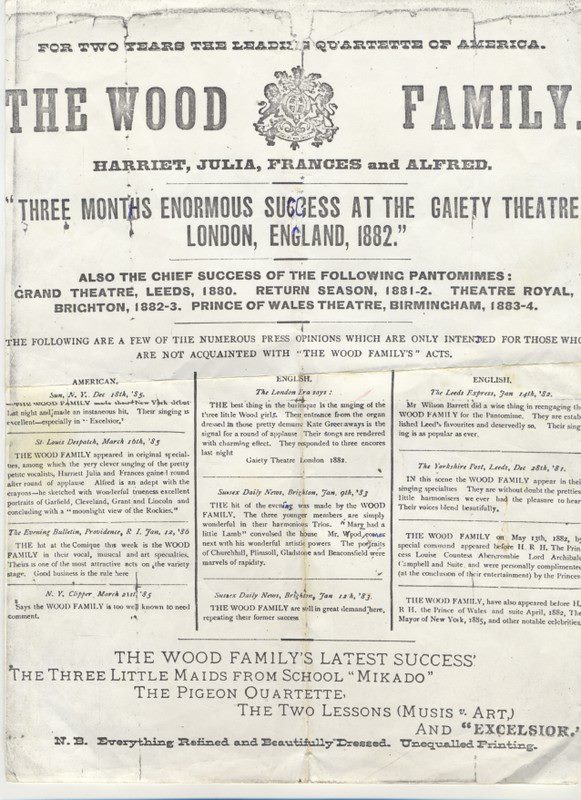 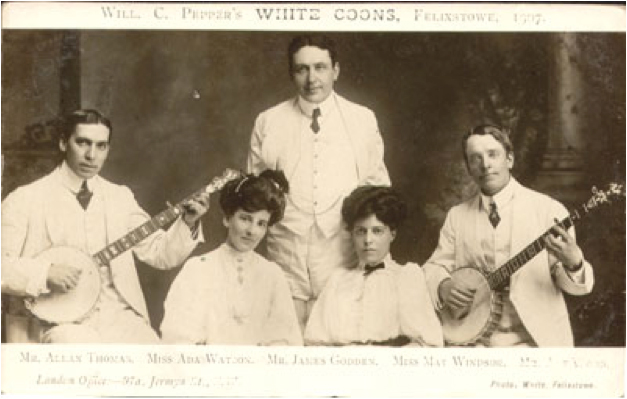 And here is is late in his career, in 1923, playing the (rather freaky) pantomime dame... 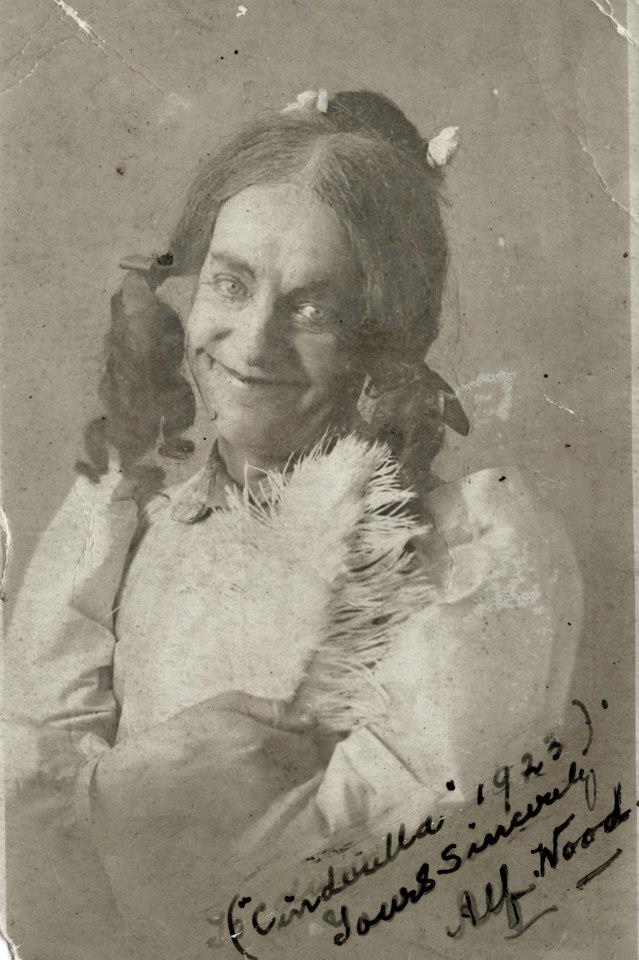 I did have a story somewhere about him being gifted a very particular banjo from a player in the USA, but I can't find that right now - will have to have a search.

I have one photograph of him. 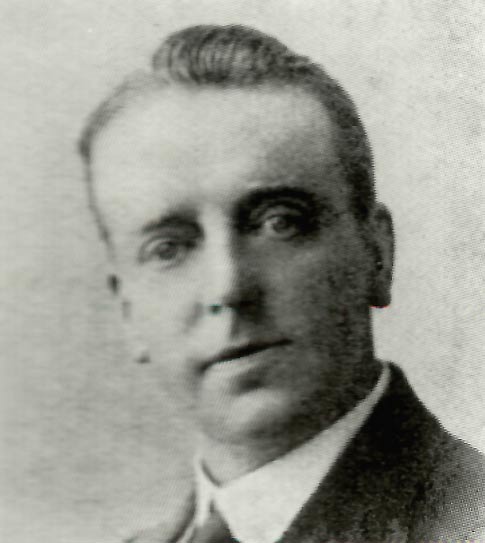 Interesting, that's one I hadn't seen - where did it come from?

I have one photograph of him.

Sorry I can't tell you its exact source, but I received it with a bunch of photos that were sent to the late Hal Allert.

It seems to be cropped. Do you have the full original you could copy for me? My cousin and I would both be very grateful!

Sorry I can't tell you its exact source, but I received it with a bunch of photos that were sent to the late Hal Allert.

Very sorry but that is all I have.

Thanks very much in any case!

Very sorry but that is all I have.