I have been slowly adding scans of BMG magazines that have been kindly loaned to me since I created the John Field Memorial LIBRARY.

Tony Bryan (and his friend Tapis d'Orient) sent John's collection that was originally posted and since then I have received BMG copies from all over the world, so big thanks you to all who have contributed.

Today I am pleased to announce a really special update to the LIBRARY that has come from a collection inherited some time ago by site member  Mike Redman and in turn loaned to our friend Richard Ineson.  Richard and I had discussed scanning some VERY early BMGs and over the last few weeks I have scanned and cleaned up many rather crispy and faded magazines, dating back to the Second monthly edition that was published in November 1903. 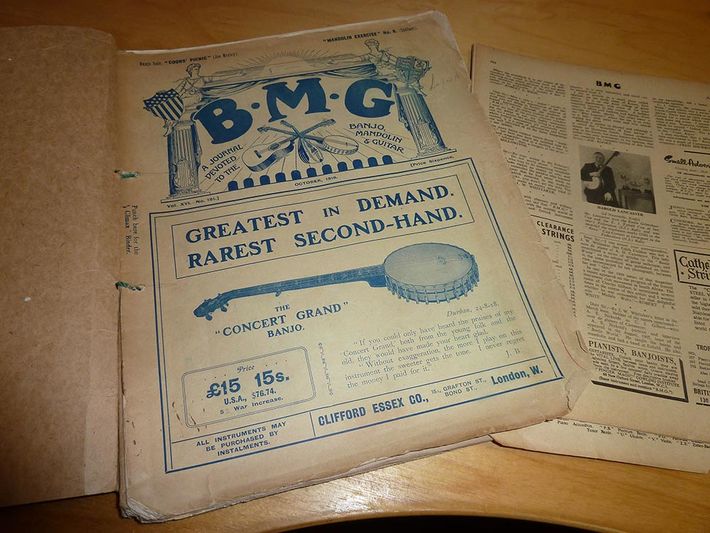 Many of the magazines uploaded were published in the run up to and during World War One. It is interesting to see all the references to banjoists in action with the Army and Navy around the world. You can tell that as the months and years of the War progressed the publishing materials were becoming more scarce. The quality of the paper used dropped and the number of pages reduced, but the worse problem is that the paper became tissue paper thin, almost transparent, which makes scanning a real nightmare! The other problem is that the paper, probably due to lack of additives, has turned brown and brittle, so handling these early mags is a delicate job. Fortunately, with the help of Photoshop, I have managed to clean up and de-dog ear the pages and the scanned editions are now online for FREE download as PDFs.

Enjoy them, as they are a very interesting insight to Classic Banjo at the time when the Banjo was KING!

Many thanks Ian for the latest pic - a much better resolution. I only sepia'd mine just for the Register.

ps. If I have any Tippex remaining I'm sure it will be in block or powder-form now!!!

That was my initial thought!!!

I think that this photo may have been ripped and pieced together.  It is as if someone who was seated below the apparently floating legless banjoist has been surgically excised and the feller seated beside  the banished player has been moved over to the left (to the right from the point of view of the musicians). White indentations in the leg of the trousers of the player seated beside the possibly moved-over player help define the vaguely trianglular photo piece that was shoved over. Now instead of legs the standing zither-banjo player has a plot of land below his waist.

That was my initial thought!!!

It is pretty clear to me that the zither banjoist is standing with one leg on the chair to his right supporting the banjo and the other on the ground supporting his body. 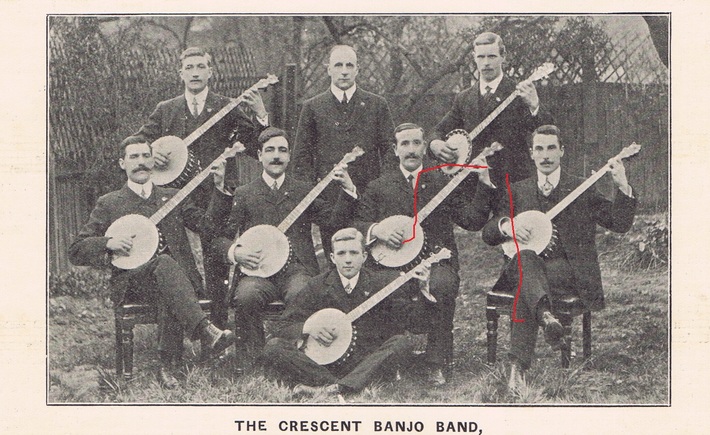 I agree Joel and banjoist top left is with a similar stance.

Thanks for the XRay explanation of the disappearing legs, but doesn't explain why he had such skinny legs!

What I don't know is how did the chap at the back with no banjo manage to photobomb the group photo?

Perhaps it is James 'Jimmy' Parslow himself, although by that time he would have been 63. The crescent featured on many of his banjo necks and they all came from basically the same area, namely Kingston/Richmond and is said did run a banjo quartet to promote his instruments.

Top left banjoist has a visible leg right where one would expect it to be. Top right banjo player would be awfully unstable with his left leg directly behind the leg of the seated rightmost banjoist.  Moreover each banjoist is seated all the way back in his chair, suggesting that these chairs had backs. That being the case, where would a banjoist standing behind one of these chairs find a place to place a foot?

I agree Joel and banjoist top left is with a similar stance.

I don't think we will ever get to the back of it!!!

Many chairs have an opening at the base of the upright back.  The person sitting in the chair could scooch forward enough so that the person standing in the back could put there foot on the seat using that very opening.  It seems pretty obvious how they are standing to me.

BTW, there are many descriptions of Joe Morley playing on stage by standing up with one foot on a chair.  TBJ also stands in three of the Pathe films so it was a pretty common position to play in.

This catalog contains many examples of chairs that have an opening that would allow one to put their foot through for the time it would take to take a photo.  It is a common pattern that is still in use today.

The current metal generic folding chairs found all over would allow for this very position if one wanted to recreate the photo.

And here is a catalog with folding chairs from the late 1870s-- nothing is new...