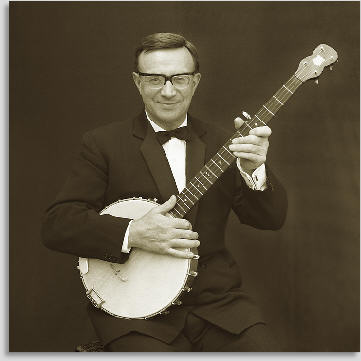 Bill was an amateur player with and encyclopaedic memory for classic banjo solos. It is said that he could keep in his head, and play perfectly, over 100 solos.

You can find out all about Bill on the website dedicated to his life:  williamjball.co.uk

Last week I was scanning some BMG magazines from the 1930s and came across a photograph of a very intense looking young Bill Ball. 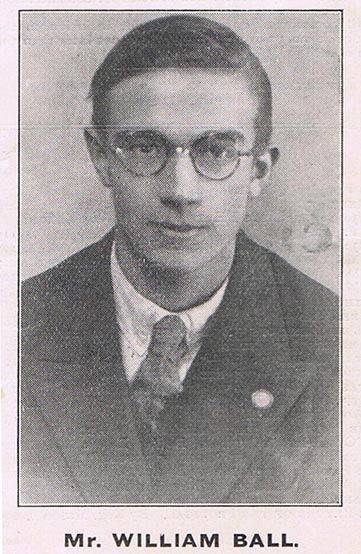 One thing that always makes me smile is the story of Bill making video recordings of his playing for Gordon Dando. He was asked to play a solo on a Clifford Essex Paragon, a banjo which Bill disliked intensely! He refused to play a banjo with a resonator fitted, so that had to be removed before he would even consider playing, and then only reluctantly.  :-)

I will see if I can locate the video, but it seems to hiding somewhere on my computer at the moment!..  He looks like he is sucking a wasp while playing!

Do visit Youtube where you can watch the Dando videos of Bill's amazing classic style playing.

He was a great player. RIP

One of the all-time greats. I must dig out my cds of him.

Bill's son Fred produced 4 CDs of his Dad's playing - I've completely sold out of the stock I bought for Rallies but Fred is a member of this site but you could also check: http://www.williamjball.co.uk/

Thank you Dave. Earlier I looked on Freddie's William J Ball website but could not see any CDs for sale. I wonder if he has sold out?

Look at Bill's disdain for the Paragon at the end of the video :-)

I used to get the same feeling playing Jack Hirst's "Beast"!

He may well have done - I nudged him a couple of years ago when stocks were getting low....

Thank you Dave. Earlier I looked on Freddie's William J Ball website but could not see any CDs for sale. I wonder if he has sold out?

I always loved Mr. Ball's playing.  There is a picture on the site of him in the 30's with a flanged/resonated 10 15/16 head Whyte Laydie, and I think this is what he won the Cup competition with if I remember the website correctly.

I prefer a resonator, but I'm no William Ball, either.

I have his 2 LP's, but don't have the rest of the CD's.  I would buy them if they were available.