This excerpt is from Frank Converse's "Banjo Reminiscences" series published in "The Cadenza" in the late 1890's-early 1900's. His comments on Horace Weston and others takes on the patronizing tone and language of the era, and for that I apologise--I just want to pass on some interesting period observations on a great classic-style banjoist.


...Of all the colored players who have been much in evidence, it is generally conceded that the name of Horace Weston bears undisputed pre-eminence.

Unquestionably, Weston was a musical genius, as attested by his ability to play on a variety of instruments, to some extent. His biographer has said that he first essayed on the accordian, which he mastered when but seven years of age; at age ten he could play the violin, and then followed the violincello, double bass, slide trombone and guitar. He was also an expert dancer. But that he was an artist--opinions differ.

Genius alone does not constitute the artist. That's the foundation. But something more is essential--a mental something that observes much, thinks much to--so to speak--complete the superstructure.

That Weston was a remarkable and highly sensational executant in his way, will not be disputed, or that he could produce many novel and startling effects; but they were distinctly his own--they were "Weston" and ceased with him.

Although familiar with many instruments, he excelled with the banjo, and it is as a banjoist that the world knew him; for he had traveled extensively here and abroad--a sensation in London, Berlin, Breslau, Vienna, Hamburg, through France; and in this country with various companies, at watering-places, on steamboats, in saloons, beer gardens, etc., from about the age of 30 nearly up to the time of his death in 1890.

When playing, he preferred to be seated in an arm chair, with the rim of his banjo resting upon one of the arms, which gave a solid support for the instrument, and so increased its tone volume.

His favorite banjo was of full size, with a shallow rim. He preferred light strings. His bridge, very narrow and low--much narrower than the ordinary violin bridge--he place quite near to the tail-piece to in order to obtain a nasal quality of tone, which he fancied. The narrow bridge also enabled him to to execute a very novel, if not very musical, effect which he produced by rubbing the tip of his extended thumb rapidly to and fro across the strings, causing a buzzing sound which he would introduce ad libitum for various purposes.

It can be truthfully said of Weston that, as an example of certain possibilities--musical or otherwise--of which the instrument seems susceptible--he was unrivaled.

Sam Pride, a colored player who I have mentioned, was a neat and quite artistic player with the thimble, and introduced some fine effects. He could execute a trill with such rapidity that, when upon strings stopped in unison, it approximated a sustained tone.

The Bohee brothers, James and George, colored, were noted "thimble" players of the Weston "school," though not so robust and demonstrative in their execution, in fact aspiring to the refined. Gentlemanly and unassuming in demeanor, they were doubly popular with the public. They frequently traveled in company with Weston,, and were prominent factors of the combination. They went to London, England, several years ago where, meeting with public favor as players and teachers, they remained.

Blackman (or Blankman), an old-time colored player, of Troy, N.Y., is credited with having applied the tremolo movement to the banjo over thirty years ago.

That was before the advent in this country of the mandolin.

Query: Had Blackman heard the mandolin and so conceived the idea of substituting the forefinger for the plectrum? For thats it action--the addition being the accompaniment with the thumb...

Permalink Reply by Joel Hooks on January 11, 2009 at 7:35
Thanks, I love this stuff. So when are you going to make your collection of "The Cadenza" available? Just wishful thinking.

"A correspondent who is very much interested in the Journal, and particularly in Mr. Baur's Reminiscences, is a little puzzled at the statement made in Mr. Baur's last letter, that Weston did not know one note from another. He thinks this cannot be true; for he states that on a conversation with Weston, he discovered that he knew considerable about music.

In publishing Mr. Baur's Articles we do so, of course, under Mr. Baur's name as author, and he alone is responsible for the statements and opinions he offers.

We do not agree with him in his estimation of the late Mr. Weston, because a long and intimate acquaintance with him made us acquainted with his wonderful abilities and musical gifts. Weston inherited his musical talent from his father, who was a musician of ability, and a teacher of music and dancing in the state of Connecticut.

Weson did not play the Banjo by note: that we at once admit, for at the time he took up the Banjo there was little chance for anyone to learn it by note. But he could sing by note, and many times has the writer handed him pieces of printed music and heard him sing, whistle or hum them over from the note, as correctly as any of our Orchestra leaders could have done."

I find it funny that old S.S.S would defend Weston for not playing the Banjo by note, and constantly take shots at other people for the same. Stewart was an interesting fellow and is most often quoted incorrectly.

This might be for another topic but, the Stewart vs. Fairbanks competitiveness is pretty well known. The constant challenging to Banjo contests for the best sounding banjo etc. I think that most of that was simply a ruse for publicity.
I did run across this.

Back to Weston. A lot of music was published with his name attached. For example http://tinyurl.com/84t7wo arranged for a orchestra. Not to mention all of the Banjo music. I wonder who was writing the notation?

Permalink Reply by Carl Anderton on January 14, 2009 at 3:02
I read in Schreyer's "The Banjo Entertainers" that Weston "served in both the Union army and navy during the Civil War." Checking his name on the Soldiers and Sailors System website http://www.itd.nps.gov/cwss/ I found a Horace Weston listed as a waiter on the USS Niphon, which patrolled the blockade along the Southern coast. His age is listed as 21, which does not correspond with Weston's given birthdate of 1825, but it is an interesting co-incidence.

Permalink Reply by David Wade on January 20, 2009 at 7:43
Interesting on the Horace Weston side, I've just upload a scan of "Horace Weston's Grand March" taken from a publication called "The Royal Banjo Entertainer". This is from the mid 1890's I guess and mainly contains comic "music Hall" songs except for about the last eight pages which are solos and duets. This is easily the most technically demanding piece in the book - the opening chord it's self is a challenge and made me rethink how a 7-string is intended to work.
What do we know of Weston? Did he spend some time in the UK?
David

"Sam Pride, a colored player who I have mentioned, was a neat and quite artistic player with the thimble, and introduced some fine effects. He could execute a trill with such rapidity that, when upon strings stopped in unison, it approximated a sustained tone. 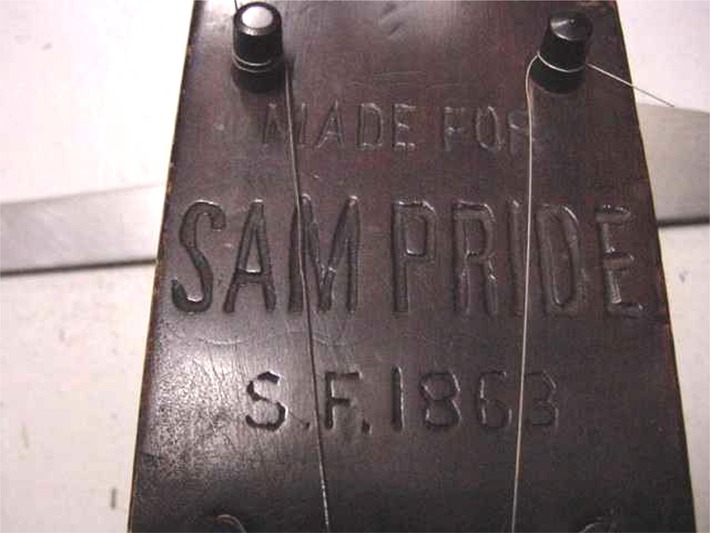 "Sam Pride (or Purnell) is mentioned very briefly in the Converse Reminiscences as a black player who "had a few attractive effects." "